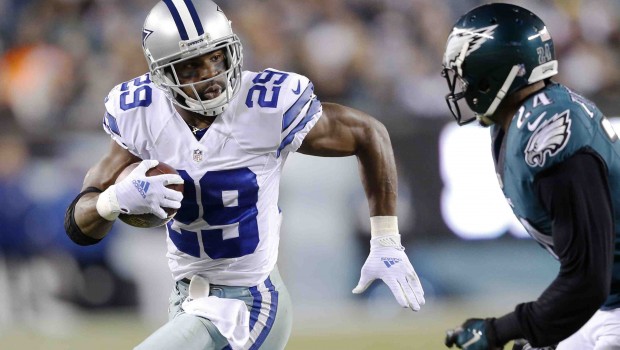 EAGLES AND DEMARCO MURRAY — HOW CLOSE TO MAKING A DEAL?

Jerry Jones is a hated man in Philly.

The Dallas Cowboys’ owner and his new BFF Chris Christie embarrassed themselves in press boxes during the 2014 season and playoffs.

But Jones is a great businessman, and he has no intention of negotiating against himself to keep prime-time running back DeMarco Murray.

Murray appeared to have leverage Tuesday evening with reports that Oakland, Jacksonville, Tampa Bay and the Eagles all have expressed varying degrees of interest.

The Raiders, Jaguars and Bucs have the financial flexibility to pay Murray what he seeks, although they don’t fall into the category of Super Bowl contenders that the running back has stated would be one of the motivating factors in his decision.

But put them aside for a moment. What about Philly?

Once you get past the notion that the Eagles would jettison a quality back in LeSean McCoy to sign Murray for a comparable deal, here’s what can be said:

Murray is more of a north/south runner than McCoy and a better fit for Chip Kelly’s scheme in that respect. He has a strong relationship with Sam Bradford, the quarterback the Eagles acquired earlier Tuesday from St. Louis. And then you have the added benefit of sticking it to a division rival.

That doesn’t mean the two sides are close. Interest is far different than negotiations. And remember, the Eagles weren’t exactly willing to break the bank for Frank Gore, who balked on his deal and wound up with Indianapolis earlier Tuesday.

The McCoy angle plays heavily into what unfolds.

Philly traded its star running back to Buffalo last week, and he quickly agreed to a five-year, $40 million contract with slightly more than $18 million in guaranteed money that can escalate to $26.5 million guaranteed.

Murray has rushed for 2,966 yards the last two seasons. McCoy is the only other back close with 2,926 yards.

If you’re Murray and his representative, you point to McCoy’s contract and argue that helps establish the market value. The Cowboys will make a much different argument.

Neither Murray nor the Cowboys have revealed their financial parameters publicly. But Murray clearly believes he deserves a deal that averages at least $8 million a season. The Cowboys’ response is believed to be in the range of $5 million to $6.5 million that could fluctuate depending on how it’s structured. Guaranteed money is another point of contention between the Cowboys and Murray’s camp.

What happens if Murray departs? There are some intriguing names left in free agency that could be part of a committee approach if the price is right. But a source said the draft would be the most likely avenue to replace the back who broke Emmitt Smith’s single-season rushing record for the franchise.

Murray was allowed to hit the free-agent market because he’s convinced his value is greater than what the Cowboys are willing to pay. The only reason the Cowboys will raise their offer —remember, owner Jerry Jones said the team has a range to retain Murray — is if Murray generates leverage by entering into concrete negotiations with another team.

He could be on the verge of that happening.