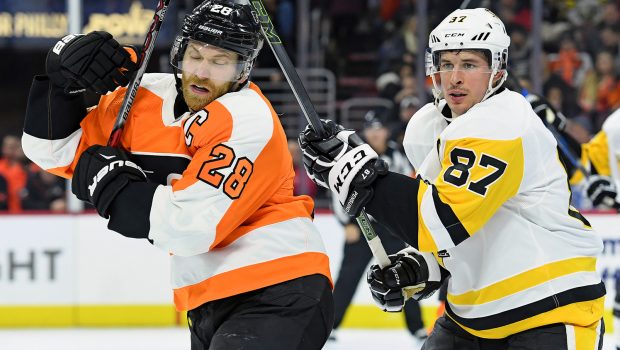 “It seems like we were really far,” Sean Couturier said two weeks ago at the Flyers’ end-of-the-season press conferences as reported by NBC10. “They dominated us, but at the same time, I feel we were that close to beating them. Maybe it’s funny to say, but if we capitalized on a few chances earlier in games, if we’re a little more disciplined, then they don’t take over and it’s a tight series.”

The Pens swamped the Flyers in six games in the NHL playoffs.

Then the Washington Caps bounced the Pens in six.

So, how impressive was the Flyers’ supposedly “close to beating them?”

“Even if we didn’t have a great playoffs, we basically almost pushed the Stanley Cup champions into a Game 7,” Jake Voracek said.

“We’ve got to win at least a playoff series next year. But a lot of bright futures, lot of guys that had great years and hopefully we’re not that far off.”

“Now we have young players coming up and making a difference,” Claude Giroux said. “You look at our team and we have a good balance of older and younger guys. I’m not sure what the plan is coming September, but if we have the same team in the locker room, we’re going to be pretty happy about that.”