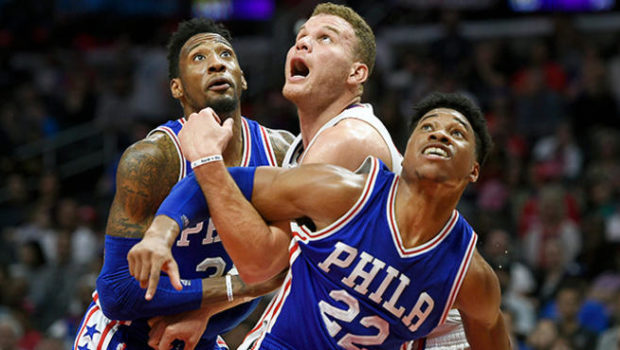 CLIPS PRAISE SIXERS AFTER BEATING THEM 112-100!

Richaun Holmes (22, above) led the Sixers with 24 points and 9 rebounds, while Dario Saric, starring since Joel Embiid was lost for the season with an injury, added 16 points.

For more than three quarters yesterday at the Staples Center, the L. A. Clippers were outworked and outplayed by a Sixers team that has not even one superstar. The Clippers have three.

In the end, talent won out, as the Clippers were able to separate themselves from Sixers in the fourth quarter to win, 112-100.

Chris Paul led all scorers with 30 points, while DeAndre Jordan tallied 19 points and 20 rebounds, while shooting a proficient 7 of 10 from the foul line. Blake Griffin added 15 points and 10 boards.

Consider it a testament to the 76ers (23-42) who are playing to win, unlike in past rebuilding seasons.

“If you show up and you just expect to beat them,” Blake Griffin said, “maybe like you did three years ago, or whenever it was, then you’re going to get beat.”

Paul praised the Sixers as “gritty” while Jordan said “they execute their stuff and they’ve got a lot of talent.”

The bigger story for the Clippers, however, was that they found a way to grind their way to a victory. The Clippers tend to do things in dramatic fashion, with big runs and individual heroics. “Those are the games you’ve got to win,” Coach Doc Rivers said. “When things aren’t going well for you.”

In a game that featured 21 lead changes and 12 ties, the Sixers entered the fourth with a 79-75 advantage. The Clippers had been unable to slow the Sixers balanced offense and up to that point were getting beaten on the glass.

“All game long we could never really get any separation from them,” Paul said.

Through the first three quarters, Rivers had mixed and matched lineups. Anything to get stops on defense. Through three quarters the 76ers shot 48.4 percent from the field.

They opened the quarter on a 10-0 run and never trailed again.

Richaun Holmes led the Sixers with 24 points and 9 rebounds, while Dario Saric, starring since Joel Embiid was lost for the season with an injury, added 16 points.