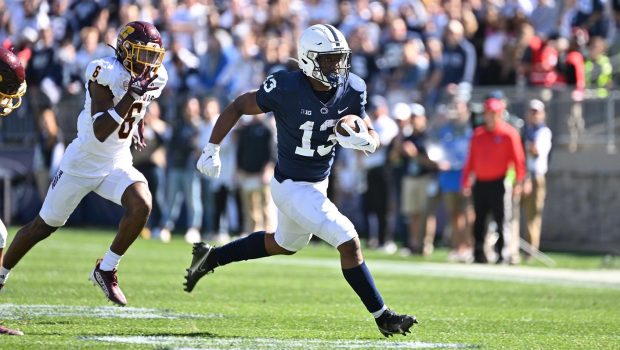 Sean Clifford completed 22 of 34 passes for 217 yards and accounted for four touchdowns for the Nittany Lions, who forced four turnovers to beat Central Michigan 33-14..

The Chippewas racked up 363 yards.

Penn State players were hoping for something more demonstrative with Northwestern up next and a trip to No. 4 Michigan looming on Oct. 15.

Penn State’s offense did that.

Clifford marched Penn State down the field and hit Tinsley over the middle from 5 yards out to start the scoring. He got another shot on a short field when Zakee Wheatley picked off Daniel Richardson on Central Michigan’s eighth play of the day and returned it to the Chippewa 15.

Clifford needed just three plays from there to find Strange on a 4-yard quick out that made it 14-0.

The Chippewas (1-3) got their offense going in the second quarter. Richardson capped an 11-play drive by hitting Finn Hogan over the middle from two yards out to make it 14-7.

Central Michigan forced a turnover on downs moments later and Richardson found open receivers again. He ended a 9-play, 67-yard drive with a 14-yard touchdown pass to Joel Wilson that tied it at 14.

Scoreless possessions followed before the Nittany Lions retook the lead with a 14-yard touchdown run from Allen. Penn State led 21-14 at halftime.

The Chippewas turned the ball over again to start the second half.

They forced the Nittany Lions to punt on their first third-quarter possession but return man Jordyn Williams fumbled the ball to Penn State’s Curtis Jacobs inside the 10.

“I’m proud of the way our team fought,” Central Michigan coach Jim McElwain said. “I thought the guys never quit. That team on the other side knew what the Chippewas were all about toward the end of that game and that’s something that makes me proud.”

A 1-yard run from Clifford before a failed two-point conversion try early in the fourth made it 33-14.