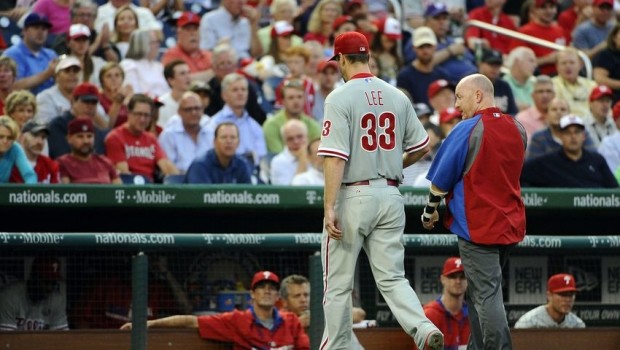 LEE'S LEFT ELBOW IS A METAPHOR FOR THE PHILLIES' LOST SEASON

Lee made his third start since his return from a two-month stint on the disabled list with a strained left elbow. Everything seemed to be going well as he retired eight of the first nine batters he faced.

But then disaster struck. Lee shook his head and shouted an expletive after he threw his first pitch to Nationals center fielder Denard Span with two outs in the third inning. He motioned to the Phillies’ dugout, then used his glove to point to his left elbow. Phillies head athletic trainer Scott Sheridan quickly met Lee, who appeared to tell Sheridan that he “felt it on that pitch.”

He was finished in a game the Phils would win 10-4.

Lee left the field. He rarely expresses emotion, good, bad or otherwise. But the frustration on his face in the dugout was painfully evident. He was upset. He knew something bad had happened. He knew his season was almost certainly finished.

“It’s obviously a frustrating moment,” said Lee, who said he started to feel something in his elbow during pregame warmups. “I had an arm injury that I’ve never had before, or anything close to it. I missed two months. I came back and on my third start, it’s back. Obviously that’s frustrating, especially when it was progressing well. It was all but gone. It was out of my mind. I wasn’t thinking about it at all until today when I was throwing those pitches. ‘Oh, there it is again.’ I was hoping it was just a little twinge that would kind of go away and it hung around.

The Phillies announced Lee has a strained left flexor pronator, the same injury as before. He has been placed on the 15-day disabled list with left-hander Cesar Jimenez being called up from Triple-A Lehigh Valley to take his spot on the 25-man roster.

Lee will see a doctor Saturday.

Who knows what happens after this? Surgery perhaps?

“It’s obviously a possibility,” Lee said. “I really don’t know. I’ll have to have the doctors assess it and do their tests.

“Obviously I’m worried about it. It came back, so that’s not good. I don’t think it’s a larger problem. I think it’s just the original thing. It was never fully gone. I think it’s the same thing. I think it was almost gone and came back.”

Lee turns 36 on Aug. 30. He is owed $37.5 million next season, which includes a $25 million salary and a $12.5 million buyout on a 2016 club option. The Phillies thought a strong month from Lee would allow them to trade him before the end of August, but that no longer is a possibility.

They just hope they have him healthy in 2015.

The Phillies played on, although it had fallen by the wayside following the team’s Trade Deadline inactivity and Lee’s injury. Left-hander Antonio Bastardo finished the inning as the Phillies scored five runs in the fourth to take a 5-0 lead.

“The bullpen was big,” manager Ryne Sandberg said, referring to the innings that ate up in Lee’s absence. “It was good to see the offense come alive after Cliff was taken out. It was the whole lineup.”