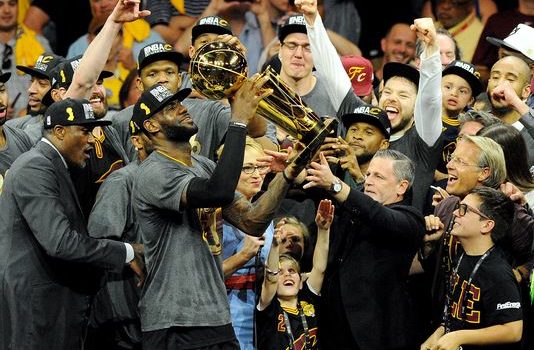 CLEVELAND HAS A TITLE TO CELEBRATE — NOW WHAT ABOUT PHILLY?

For the first time since 1964, a team from “the mistake from the lake” has won a title!

Which means that the majority of the crowd that watched and celebrated back home at the Cavs’ home arena was not alive when Jim Brown led the Browns to the 1964 NFL title.

Yet with an ultra-determined LeBron James producing a triple-double (27 points, 11 rebounds, 11 assists) to go with one timely, thunderous, fourth-quarter block, and co-star Kyrie Irving performing all sorts of wizardry amid a 26-point outburst, the Cavaliers robbed the Golden State Warriors of a repeat NBA crown and made history.

Finally, with the Cavs also becoming the first team in NBA history to overcome a 3-1 deficit to win the crown, the heartbreak belongs to someone else.

James, who grew up in Akron, realizes what it means as much as anyone.

“Absolutely,” said James, named NBA Finals MVP for the third time. “Just knowing what our city has been through, Northeast Ohio has been through as far as our sports and everything for the last 50-plus years. You could go back to the Earnest Byner fumble, (John) Elway going 99 yards, to Jose Mesa not being able to close out in the bottom of the ninth, to the Cavs going to the Finals in 2007 – I was on that team – and getting swept. And then last year.

“Our fans, they ride or die, no matter what. The Browns, the Indians, the Cavs…they continue to support us. For us to be able to end this drought, they deserve it.”

Say what you want about James, but two things are crystal clear about now:

• Warriors sharp-shooter Steph Curry might be the back-to-back MVP, but King James is still the best basketball player on the planet.

• James is a man of his word, pledging to bring a championship upon his return to Ohio after the years his talents toiled on South Beach, so to speak, with the Miami Heat.

But this championship wasn’t supposed to happen like this. Not here. Not now.

A week ago, the Warriors led the series, 3-1. And nobody comes back from that type of deficit to win in the NBA Finals. Until now.

The Cavs, with a rookie coach in Tyronn Lue, who took over in midseason, are the first team since the Washington Bullets in 1978 to win a Game 7 on the road for a title.

Add the triple whammy of the Cleveland Curse, and there was no way the Cavs could pull this off.

Or so many of the experts – and non-experts like yours truly – thought.

The Cavs seized the momentum in Game 5 – which Warriors star Draymond Green missed, because of a suspension after striking James in the groin in Game 4 – and never gave it back.

Golden State had flurries of momentum in Game 7, and at one point led by 8 points. But they could never pull away and dominate, even with fuel from the home crowd. The Cavs always had an answer, and hot flurries of their own during a back-and-forth contest that included 20 lead changes.

With the game on the line, it was Irving rather than one of Golden State’s Splash Brothers – Curry or Klay Thompson – who nailed the clutch three-pointer on a 25-foot pull-up jumper from that provided the winning margin.

“Credit to him,” said Curry, who guarded Irving on the shot. “He stepped up and took advantage of the moment. It was not a good feeling turning around and seeing it go in.”

There was a lot of that throughout the game as Irving was the Cavs’ most reliable offensive weapon for much of the game, scoring 21 of his points in the first three quarters. He stung the Warriors with quick, darting drives to the basket that were capped by incredible finishes.

Irving’s impact throughout the series – he entered Game 7 averaging 27.3 points – makes one wonder how last year’s Finals would have turned out had he not left after Game 1 last year with a fractured kneecap. I’m guessing that maybe it would have been the Cavs going for a repeat crown.

Unfortunately for the Warriors, they are living it, too. After producing the best regular season record in NBA history (73-9), they wound up five points shy of finishing the job with a championship.

In the end, they looked tired and battered. The Warriors went 1-for-10 on three-point shots in the fourth quarter, when the Splash Brothers – Curry and Thompson – combined for just seven points.

What a fine time to go cold.

The people in Cleveland surely know the pain. And now they know the championship joy, too.