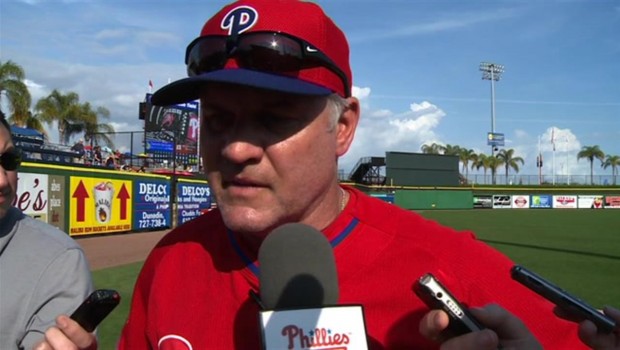 As the Philly region endured snow and ice, it was sunny and 70 in Clearwater as the Phillies began their spring training schedule Sunday against the University of Tampa. The bad news is that Tampa beat the Phils 6-2.

Russ Canzler, Aaron Altherr and Tommy Joseph strung together three straight one-out hits to put the Phillies ahead 2-0 in the second inning.

After that, Philly hitters did little against the No. 1-ranked team in NCAA Division II.

”It kind of shows where we’re at as far as seeing players and workouts and seeing the work that needs to be done,” said Phils manager Ryne Sandberg (photo above), who kept the majority of his big league starters out of action.

”I think it just emphasizes that. On the offensive side of things, we stress on staying on top of the ball and creating some balls on the ground. We had too many fly ball outs,” he said.

Tampa rallied against the Phillies’ bullpen. After right-hander Nefi Ogando issued a two-out, bases-loaded walk to Andrew Amaro – nephew of Phillies general manager Ruben Amaro Jr. – to tie it in the seventh, Giovanny Alfonzo followed by hitting a grand slam off Hector Neris.

”Unbelievable,” Alfonzo said. ”It’s a dream come true to play against them. But to beat them, you never think it’s going to happen. I probably won’t sleep for the next three days.”

”Our coach told us he has a split-finger, so in the back of my head I knew,” Alfonzo said of Neris. ”I saw it out of his hand and the pitch was dancing. So I just said, ‘Throw the (bat) head at it, throw the head at it,’ and luckily I got it. But it was a big league pitch, for sure.”