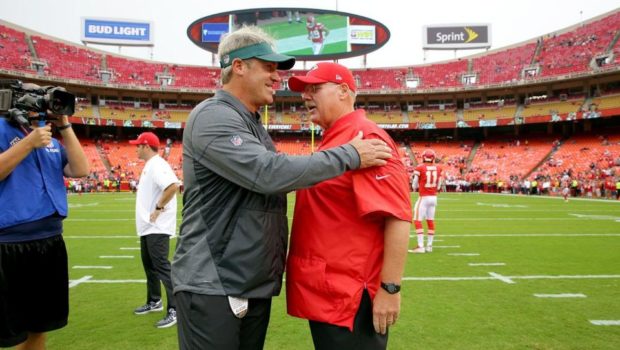 You have to wonder what was going through Eagles’ Doug Pederson’s mind as he was coaching his 18th NFL game yesterday in Kansas City.

And across the field was his mentor, Andy Reid, who had Pederson as a player and as a coach in Philly and then as an O-boss for the Chiefs.

”It was a lot of fun,” Pederson said of his return to Arrowhead. ”This is a great atmosphere to play in. These are great fans, passionate about their team, which they should be.”

It’s almost as if the Chiefs knew what to expect. And they harassed quarterback Carson Wentz most of the game, plugged up the running game and were able to knock down a last-play heave in the end zone that could have tied the game.

”It’s tough, especially for Coach Pederson,” Eagles tight end Zach Ertz said, ”knowing how much he wanted to come in here and win this one.”

Pederson has often credited Reid with giving him a chance to be an NFL head coach.

He retired from playing and took a high school job in Louisiana. Reid brought him on as an assistant in 2009, promoted him to quarterbacks coach in 2011, then brought him along to Kansas City as his offensive coordinator.

Reid even stumped for Pederson when he was interviewing for the job in Philly.

Without Reid’s impact on his career, it’s impossible to know what kind of coach Pederson would have ended up becoming. Pederson knows this and is grateful for the influence Reid has had on him.

”A lot of my coaching background and everything, obviously I credit him for,” Pederson said.

That extends beyond the playbook, too.

”His attention to detail, his drive, his motivation, how well he motivates his players and gets the most out of players I think are some of the biggest things that I’ve taken away from him,” Pederson said. ”The way he prepares during the week. Those things are things that I continue to grow with.”

Pederson and Reid both said this week that they remain good friends, and that there is a certain level of respect between them. That admiration continued after Sunday’s game, when Pederson called Reid ”a great mentor to have” and Reid also lavished praise on his protege.

”My hat goes off to Doug, what a great job he’s doing,” Reid said. ”He has a good football team. The Eagles are in good hands.”