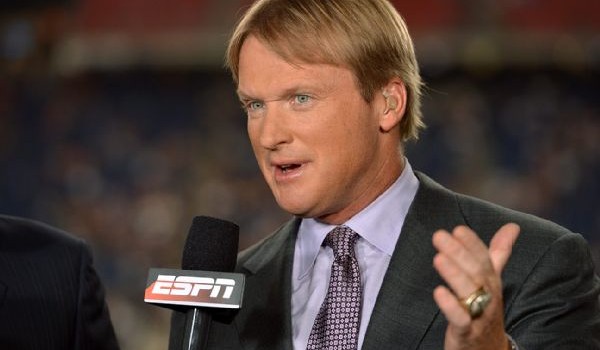 Everyone has an opinion about whether the Eagles will somehow move up far enough to snag Oregon QB Marcus Mariota in the May NFL draft.

And few have as educated a guess as Jon Gruden, a Super Bowl-winning coach and now an ESPN analyst.

Gruden was asked by CSNPhilly.com about the Eagles’ quarterback situation, specifically about Nick Foles‘ ability to continue to thrive in the offense. While Gruden was complimentary of Foles’ talents, he also created some possible intrigue.

“Chip Kelly, I’m sure, is gonna be looking for quarterbacks — we all do,” Gruden said. “And I’m sure that Marcus Mariota is on his speed dial.”

Gruden does an annual “quarterback camp” on ESPN with key members of every year’s quarterback draft class, and Mariota will be one of the quarterbacks this year. Gruden was asked if he would give up “a couple of first-round picks” in an attempt to move up and draft Mariota. The Eagles own the 20th pick in the first round.

“Too early for me to say that,” Gruden answered. “I’ve got to sit down and really study him.”

Mariota told the Honolulu Star-Advertiser on Saturday that he might not throw at next month’s NFL Scouting Combine because he is recovering from a shoulder injury suffered in the Ducks’ loss to Ohio State in the national championship game.

Mariota and Florida State’s Jameis Winston are the unquestioned top two quarterbacks available in the draft, but Winston is considered more NFL-ready. In their first mock drafts of the year, NFL Media analysts Bucky Brooks and Daniel Jeremiah have Mariota going 18th and sixth, respectively, in the first round.