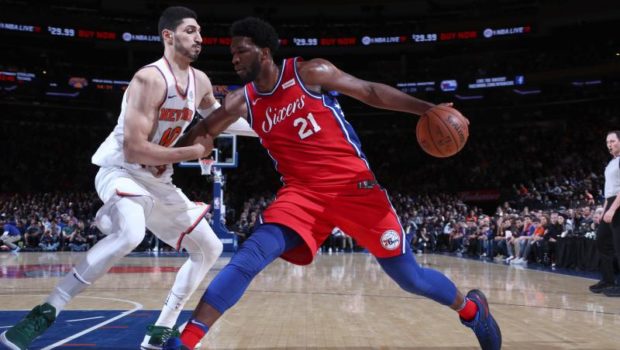 Joel Embiid had 25 points and 16 rebounds and JJ Redick scored 24 points as the Sixers snapped a five-game losing streak with a 105-98 victory over the New York Knicks at Madison Square Garden.

Neither player was cleared to play until going through pregame warmups, and their presence gave the 76ers just enough to win their first Christmas Day appearance since 2001.

Embiid, who has been battling a bad back, powered through a big-man duel with Enes Kanter, who had a season-high 31 points and a career-best 22 rebounds.

Redick, who missed the last game with right hamstring tightness, helped the 76ers pull away from an 89-all tie midway through the fourth quarter.

Kristaps Porzingis scored 22 points for the Knicks, who fell to 22-30 on Christmas with their fifth straight loss on the holiday.

Backup point guard T. J. McConnell had the Sixers’ final eight points of the third quarter, and the 76ers pushed the lead to nine with about 9 minutes left in the game. The Knicks battled back to tied it 89 on Porzingis’ three-point play with 5:20 left, but Philadelphia promptly scored the next seven to go up 96-89 on Redick’s 3-pointer with 3:34 to play.

Philly’s young stars kept the Knicks from getting much closer, with Embiid making a 3-pointer and Ben Simmons stealing Porzingis’ pass and dunking it, both times hiking the lead back to eight.