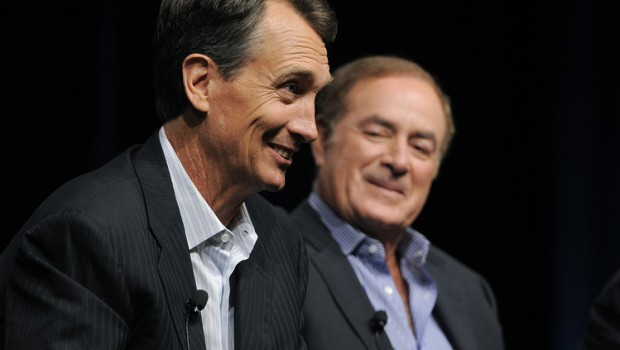 HIS EAGLES’ SUPE PICK OUT THE WINDOW, COLLINSWORTH PREPARES FOR PATS-SEAHAWKS

When it comes to NBC analyst Chris Collinsworth, there are some Eagles fans who will never forgive him for picking the Birds to go to tomorrow’s Super Bowl.

They think he cursed the team’s chances to go all the way.

For the record, here is what he said last August:

So now Collinsworth and play-by-play man Al Michaels (photo above) prepare to do the Seahawks and Patriots Super Bowl Sunday night at 6:30 on NBC10.

In the two weeks before the game, the Pats and Seahawks were combing through endless amounts of tape. They are memorizing until they have instant recall to make split-second decisions and they are highlighting the mismatches between the two teams.

He identifies the key components. Sherman is covering Packers wide receiver Davante Adams one-on-one. Defensive tackle Landon Cohen moves from the middle of the defensive line out into the open field to cover wide receiver Randall Cobb out of the backfield. Safety Earl Thomas is lined up deep, while the other safety, Kam Chancellor, is “underneath” in the coverage, he notes. Sherman’s coverage allows them to play zone defense on one side of the field “with some help,” he says. Then he notes, once the ball is snapped, Thomas runs to the side opposite Sherman to disrupt the Packers’ timing.

Collinsworth said there is brilliance in what is going on: Every player on the field has “help” behind him except Sherman, who wants the ball thrown in his direction. Packers quarterback Aaron Rodgers takes the bait and throws the interception.

“Now,” Collinsworth told the Wall Street Journal last week, “tell me how you are going to get all that on television? You don’t.” He said if he breaks down that key play during the Super Bowl telecast, he’d get 15 seconds to talk. “So you’d have to only focus in on Sherman and what he did down here. That’s the essence of the play.”

But tape study is the backbone of the preparation. In his office in Cincinnati, Collinsworth has four laptops firing at any given time. He has a hand-held clicker that allows him to quickly rewind a play—sometimes he’ll watch the same one double-digit times.

Once he notices something worth covering in the play, he speaks into a recorder which will eventually send voice notes to Michaels, NBC reporter Michele Tafoya, coordinating producer Fred Gaudelli and director Drew Esocoff.

The notes can be identifying potential problems for the next opponent, or a notable thing about a player he noticed on film. He has a voice-recognition system that helps him transcribe his thoughts, but it’s a work in progress. Patriots star tight end Rob Gronkowski, in the voice-recognition system, became both “Run Cows” and “Gatuski.”

When Seahawks defensive end Cliff Avril makes a nice move against the Packers, he notes that Avril was “borderline unblockable” in last year’s Super Bowl and that his pressure on Peyton Manning was wildly overlooked as a key to the win. He peruses Pro Football Focus—an analytics company in which he is an investor—to find out trends over time. One he quickly noticed while breaking down the Seahawks’ defense is star defensive lineman Michael Bennett ’s tendency to jump offsides.

“So right away, I know that’s a story line for the Super Bowl. Can they get him offsides? He wants sacks, he wants to be MVP,” he said. “Can the Patriots get him to jump?”

Former Oakland Raiders coach John Madden, a longtime broadcasting legend, taught Collinsworth the most valuable lessons in his film study. The first is on how his eyes should progress when he’s watching a play.

“He told me to watch the game inside-out,” Collinsworth said. That means to watch the interior of the offensive line—what is the guard doing? Where are the offensive linemen headed? That, he said, will tell you what’s going to happen in the rest of the play. He said his eyes do generally follow that rule, but as a former Cincinnati Bengals wide receiver, he admits he first looks at the defensive pass coverages “just to guess.”

“I lived with the passing game so it’s a little easier for me to pick up on the secondary than what’s going on inside,” he said.

He said the study is actually the easy part of the week. Saturday and Sunday bring new stresses. There is last minute film-study and meetings to try to get everything in order. Then there is the truly hard part: the memorization meetings. Collinsworth and his information guru, Andy Freeland, meet in a room and go over everything—everything—that he should have memorized.

But the memorization brings its own problems. Collinsworth said Madden taught him “not to fall in love with preparation.” If you are too confident in your preparation, Collinsworth said, you won’t notice the subtle differences in the game. He does admit some nerves going into the game—adding that there are now “two million people” who are ready to analyze every word spoken on the Internet.

“It’s high-stakes poker for everyone involved, for the two teams, the coaches—every mistake they make is going to be news, national news,” he said. “Same goes for us: The Super Bowl is a different deal.”