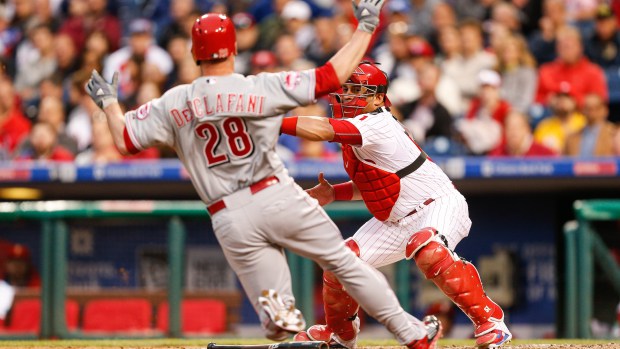 What was Chooch thinking?

That’s what Dr. Phil would have asked Phillies catcher Carlos Ruiz after his brain cramp in the fifth inning of last night’s 6-4 loss to the Reds.

With the tying run in and one out, Ruiz evidently forgot Joey Votto had been intentionally walked to load the bases. When Todd Frazier followed by hitting a slow roller to short, Freddy Galvis threw home with the pitcher running and Ruiz just had to catch the ball with a foot on the plate for a force out.

Instead, Ruiz blocked the plate and tagged Anthony DeSciafani for the second out — or so he thought.

Catchers can’t block the plate anymore due to a rule put into play in 2014 — the Buster Posey rule — and after a replay review that lasted more than 4 minutes, the call was reviewed, giving the Reds a 3-2 lead.

The Reds scored three more in the sixth to knock out Phillies starter Aaron Harang (4-6) and make it 6-2, then held on after blowing big late leads in losing the first two games of the series.

In his worst start of the season, Harang gave up six runs, five earned, over 5 2/3 innings on six hits with one strike out and four walks.