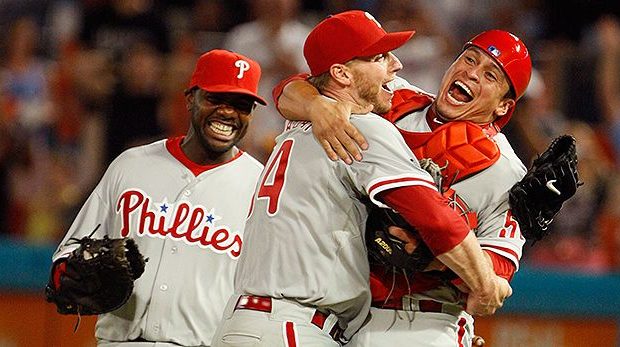 CHOOCH AND ROY: TOGETHER AGAIN ON PHILS WALL OF FAME AUGUST 8

Phillies icons David Montgomery, Manny Trillo and Roy Halladay will be the honorees of Wall of Fame weekend on August 6-8 at Citizens Bank Park.

On the final day of, August 8, the Phillies will retire Roy Halladay’s No. 34 during a pregame ceremony at Citizens Bank Park, making “Doc” forever immortalized as an all-time Phillies great.

Taking part in the ceremony will be Ruiz, the catcher behind the plate for Roy Halladay’s perfect game in 2010 and his no-hitter in that year’s postseason. Also celebrating Halladay’s incredible baseball career will be fellow Hall of Famer Steve Carlton and Doc’s teammate Ibañez.