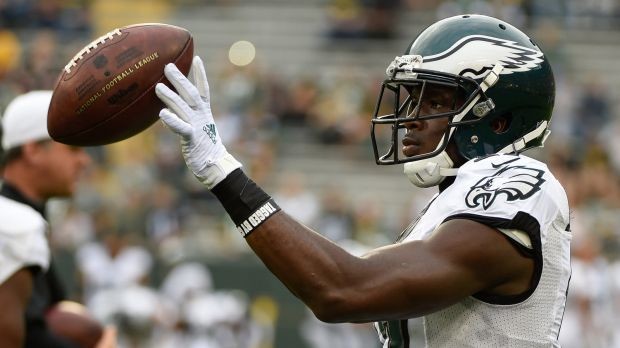 CHIPPER ON AGHOLOR: AN INSTANT IMPACT ON EAGLES’ O!

Nelson Agholor has been impressive in the preseason for the Eagles, who are looking for their No. 1 2015 draft pick out of USC to make up for the loss of Jeremy Maclin.

And no one is more bullish on Agholor than:

Kelly was effusive in his praise when it came to talking about Agholor, saying the rookie is “dynamic with the ball in his hands.”

The former USC Trojan is coming off of a terrific college season when he tallied 1,313 yards and 12 touchdowns. Based on how high Kelly is already on Agholor after a successful preseason, fans should expect Agholor to pick up where he left off in college.

The rookie was hot in the team’s exhibition games, catching nine passes for 134 yards, including an amazing 34-yard touchdown. With quarterback Sam Bradford looking quite stellar over the preseason, the pair could certainly connect often for scores and should rack up some substantial yardage this year.

For those who play fantasy football and drafted Agholor in later rounds, he appears to already have quite the high ceiling. Agholor should be in line to be the No. 2 pass-catcher in Philly opposite second-year wideout Jordan Matthews.

Last year Matthews had the quite successful rookie campaign, despite a year of revolving quarterbacks. Imagine Agholor’s potential if Bradford stays healthy all season long. Fantasy owners of Agholor, as well as Eagles fans, could be in for a sweet surprise this year.