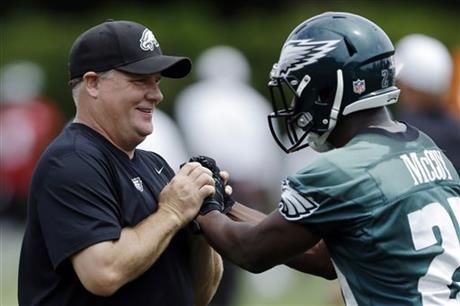 A CHIP-SHADY DINNER — WHO’LL PICK UP THE CHECK?

Chip Kelly was expected to arrive in Phoenix on Thursday night for Super Bowl week, and he is reportedly having dinner with his running back, LeSean McCoy.

Although the dinner could be anything from a business meeting to just a chance to catch up, Kelly’s new role as basically the general manager certainly adds a level of intrigue to the meeting.

While walking down radio row Thursday, McCoy insinuated too much was made of the fact that he is slated to count $11.95 million against the cap next season, the second highest total in the NFL for a running back.

“My thing is, that stuff will take care of itself,” McCoy said. “My mindset, I’m not even thinking like that.”

Speaking to the media back in December, Kelly said he wanted McCoy back, but wouldn’t call it a done deal.

It is unclear if quarterback Nick Foles, who is also in town for the Super Bowl, got an invite.