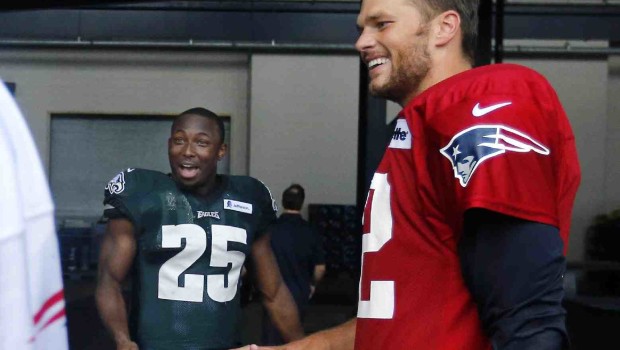 'CHIP PUSHES ME TO THE MAX MORE THAN ANY OTHER COACH'

Shady McCoy had the best season of his NFL career last year, and he knows who to thank.

“Coach (Chip Kelly) pushes me to the max more than any other coach I’ve been around,” McCoy (left in photo above with Pats QB Tom Brady) said after practice yesterday with the Patriots in Foxboro, Mass.

“Coach (Andy) Reid, he pushed me hard, but once I kind of got to a point, he let the veterans go a little bit. Chip is constantly on me.”

McCoy of course played under Reid from 2009-2012, and had some pretty successful years during that span. Listening to the running back, however, it is clear that the change in coaches has helped him take his game to the next level.

“I like it like that,” McCoy said of Kelly correcting him. “I do. Good and bad. Not everything is always good. I want to hear it.”

While Reid is one the most successful head coach in the Eagles’ franchise, it doesn’t seem to be much of a secret that he eased up in his later years. Upon arrival, Kelly did away with some of the former head coach’s rules, such as “fast food Friday” and giving the older veterans days off from camp.

With Kelly, McCoy says he has been forced to take a hard look at all aspects of his game.

“There are certain things I know I can get better at,” McCoy said. “Some players, they get to a certain level, and they hide it. I don’t hide it. If I have a bad game, I’ll sit here and tell you guys I had a bad game. That’s something I want to get better at. I want to be elite all the time. Not just on Sundays — everyday.”

One area Kelly has been pretty critical of McCoy on since his arrival is the running back’s tendency to dance behind the line too much. Kelly prefers a running back that runs downhill, a running style McCoy will likely never fully embrace. That does not mean, however, the running back isn’t taking notes.

“He is right,” McCoy said. “There are times where I will make a big (run) out of nothing, and everyone will be cheering. But there are also times I’ll take a loss for three or four yards, instead of zero. That is something personally have to get better at. It’s tough because I have gotten away with it so much. That is one thing I really want to get better at.”