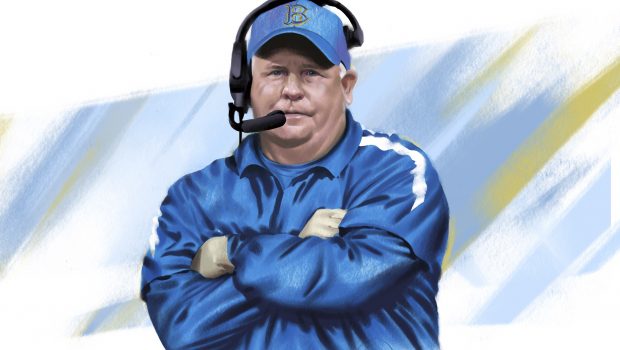 Look who’s going to be playing football this fall, even though there is a pandemic:

Eagles washout Chip Kelly, his UCLA Bruins and the rest of the Pac-12, which will start a seven-game conference football season Nov. 6.

That’s a reversal after the conference announced in early August it would postpone all sports until at least Jan. 1, citing health concerns related to the coronavirus pandemic.

“This has been the result of what we said back in August — that we’d follow the science, follow the data, follow the advice from our medical experts,” Pac-12 commissioner Larry Scott said, “and that we know how badly our student-athletes want to compete, as student-athletes for the Pac-12, but that we would only do so when we felt that we could do so safely.”

In a release, the Pac-12 said men’s and women’s basketball can begin Nov. 25 while other winter sports can begin in line with their respective NCAA seasons. Utah athletic director Mark Harlan said other fall sports, such as cross country, soccer and volleyball, will continue to plan for a spring season.

The Pac-12 move comes in the wake of a similar announcement last week from the Big Ten, which will start its football season Oct. 24.

Every Pac-12 team will play the five opponents in its division, plus a divisional crossover game, prior to the Dec. 18 conference championship game. The teams that do not qualify for the title game will play an additional conference game against a squad from the opposite division the same weekend. The Pac-12 will release its full schedule of games in the next few days, the conference said.

The Pac-12 has not received an indication it would be ineligible for the College Football Playoff due to its reduced schedule, sources said. Even if the Pac-12 doesn’t have a team worthy of inclusion in the four-team field, the eligibility component is important so it can be in position to collect the sizable payout. Last season, there was a $66 million base payout to each of the Power 5 conferences.