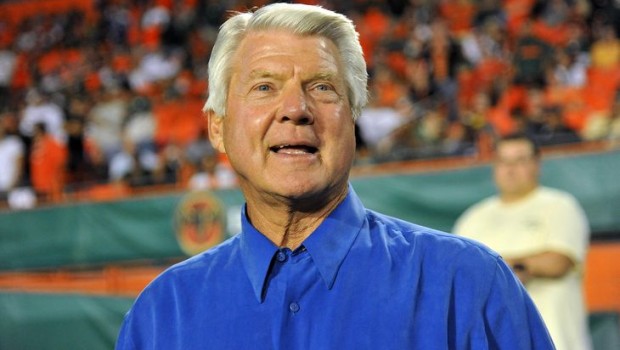 In the wake of last week’s Eagles’ roster earthquake, much has been written about whether Eagles coach and Supreme Leader Chip Kelly is an idiot or a genius.

I think he is closer to the latter, and so does:

Former Cowboys coach Jimmy Johnson (photo above), who won two straight Super Bowl rings in Dallas after winning a national championship at the University of Miami.

And Sports Illustrated’s Peter King had the good sense to interview Johnson about Kelly and how close they are.

Here are the quotes:

“Does Kelly remind you of you, 25 years ago?” I asked Johnson the other day.

“Well, in some ways,” Johnson said. “I really like what I have seen out of Chip Kelly. Chip called me and we visited a couple times, and what I heard from him, I liked.

“No one can say from the outside—right moves, wrong moves. You gotta let ’em play out. You won’t know until you see the results. I felt I was right when I did the things I did, but who knew? I traded away my starting quarterback, Steve Pelluer, to Kansas City. The leading receiver, I don’t remember his name [it was Ray Alexander] we got rid of.

“I talked to Danny White, and he retired. Then I traded Herschel Walker. You can’t be afraid to make moves. Chip’s not. So some of it is similar. But there is one big difference: We were the worst team in the league two years in a row [1988, 1989]. People were ready for a big change.

“The similarities? We’re both confident, both competent, both know how to win. We talked after he got the new responsibilities this year. I just said, ‘Go with people you believe in, and go with players who fit your personality and fit your system.’ I have talked to Bill Belichick about this too. Certain players are going to be successful in his system and not in others.”

The most controversial trade of them all last week was Bradford and a fourth-round pick to Philadelphia for Nick Foles and a second-round pick. Bradford’s played seven games in the past two years. He’s had two ACL tears to the same knee. By the time this season kicks off, he will have not played in a regular-season game for 22 months. That concerns most everyone who loves the Eagles. It also concerns Johnson.

“Well, with Bradford, the biggest concern I have, and the thing that concerned me with some players that I got burned on, is the injury factor. I remember I traded for [former University of Miami running back] Alonzo Highsmith, because I had great memories, and I did it against my doctor’s recommendations, and he wasn’t the same. So that’s my biggest concern, the health. I love Bradford, but is he gonna be on the field? But if he plays, I like him. Foles, his accuracy was a question. Bradford’s better at that, and it’s not even a questions if he’s healthy. I think Chip looked at Foles as not his guy.”

I asked Johnson if he got a sense in his talks with Kelly that he was going to be active in remaking his roster this off-season.

“Oh yeah,” Johnson said. “The last conversation was over an hour, going over everything. He was loading his guns.”