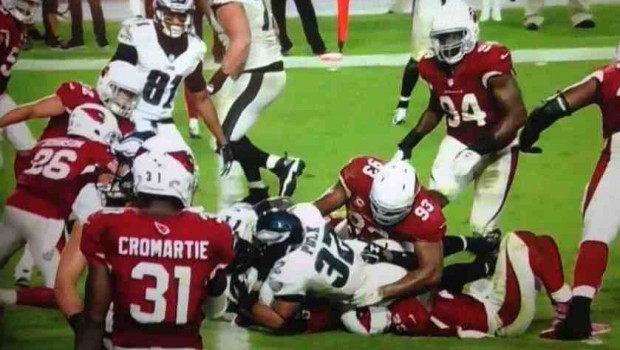 IF KELLY HAD THROWN THE RED FLAG, EAGLES WOULD HAVE WON

It appeared as if Polk broke the plane of the end zone, which would have given the Birds a TD instead of having to settle for a FG.

The Eagles lost their second game of the season Sunday — on the road against a very good Cardinals team — 24-20. In the process they wasted a career day by WR Jeremy Maclin who amassed 187 yards on 12 catches, two for touchdowns, the first a nice 21 yard catch and run to put the Eagles up 7-0 in the first quarter.

And, like the Birds’ first loss to the 49ers in Santa Clara, they could have won this one.

And they should have.

Two costly turnovers that are sticking in Eagles fans throats cost the Birds a possible 10 points. Rookie WR Josh Huff took a pass from Nick Foles and didn’t cover the ball up in traffic, then coughed it up in the red zone. Foles then threw at Huff again in the end zone and came up short for another pick.

One common dominator shrouding both defeats is reason for concern:

In both games the Birds had the ball on the goal line and were unable to punch the ball in. It’s hard for me to fathom why a coach of Chip Kelly’s acumen and extensive knowledge can’t devise some kind of heavy blocking package to run for 2 or 3 yards that can win a football game on the road when on the doorstep of the end zone.

Kelly also didn’t challenge that Chris Polk lunge before they settled for a field goal, and he should have. It’s worth the 50/50 risk to take a 7-point lead in the last minutes of a crucial game.

With these replays on the road becoming a more vital tool in calling for a challenge, maybe the Eagles should think about taking their own high tech replay system on the road, no longer letting the home team determine when and if the visitors can see it in a timely fashion.

Even with the loss, the Eagles are in good shape at 5-2 going down to Houston to take on the Texans on November 2, 1pm 0n FOX-29.