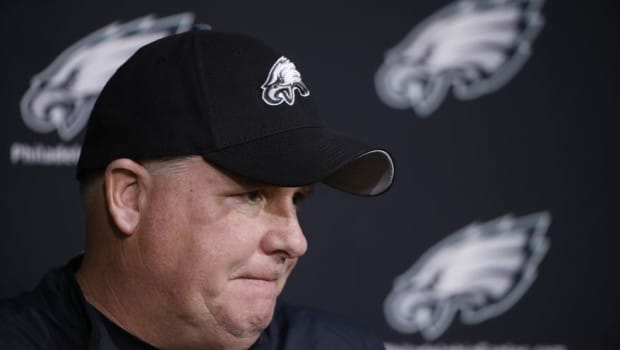 THE CHIP KELLY SWEEPSTAKES! WHICH NFL COACH WILL BE FIRED FIRST?

There is a very good reason the NFL really stands for Not For Long, which Eagles and Niners washout Chip Kelly learned very well.

Many expect the Jets to be the NFL’s worst team, and offshore sportsbook 5Dimes has Todd Bowles as the favorite to be the first coach fired. He opens at a little over 3/1.

But last year the Jets finished 5-11, and it’s supposed to get worse before it gets better. However, Bowles may get the benefit of the doubt given he has no solid quarterback and he just lost his No. 1 wideout to IR.

Hue Jackson, Browns (+525, risk $100 to win $525):Jackson inherited the mess by the lake last year and managed one win. But the Browns added a ton of defensive talent, plus they upgraded their offensive line. Look for solid improvement in Year 2.

Jim Caldwell, Lions (+1,050, risk $100 to win $1,050): Caldwell has guided the Lions to two playoff berths in his three seasons, but a late-season collapse last year has some wondering if he’s safe.

Chuck Pagano, Colts (+1,050, risk $100 to win $1,050): Pagano posted 11-5 records in each of his first three seasons, but Indy has gone 8-8 the past two years and is wasting Andrew Luck’s prime. Now there are major concerns about Luck’s shoulder, which actually might buy Pagano time.