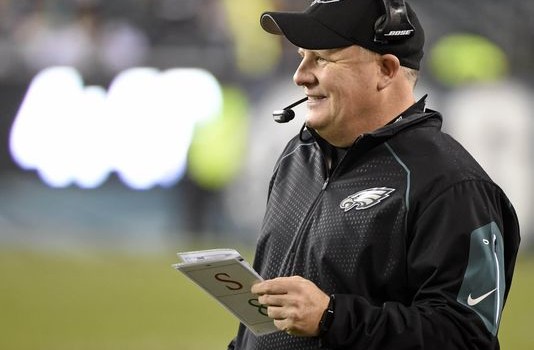 CHIP KELLY, FIRED BY EAGLES, HIRED TO COACH THE 49ERS!

Chip Kelly, fired 16 days ago as Eagles head coach, was hired today by the San Francisco 49ers to be the team’s new head coach.

Kelly established a 26-21 record in three years with the Eagles but was fired when the team was eliminated from playoff contention in Week 16.

In San Francisco, Kelly will try to turn around a team that went 5-11 this season and ranked 31st in total offense as well as last in scoring. Among the franchise’s biggest decisions will be how to handle quarterback Colin Kaepernick, who was benched for Blaine Gabbert and later placed on injured reserve.

Kelly replaces Jim Tomsula, who was fired after one season as head coach of the 49ers.