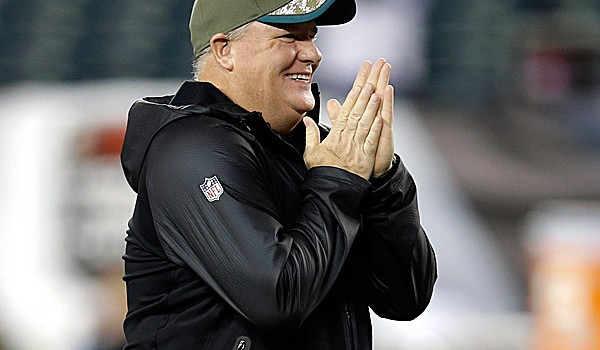 CHIP KELLY IN DEMAND! EAGLES WASHOUT UP FOR UCLA OR FLORIDA

When UCLA fired Jim Mora yesterday, it unofficially announced the Bruins’ entry into the race to land the top available coach on the landscape, Chip Kelly.

Multiple media outlets reported, and Yahoo Sports confirmed, last night that Florida athletic director Scott Stricklin and a contingent of school officials met with Kelly, but Stricklin returned to Gainesville without indication that a deal was consummated between the two. That doesn’t mean there won’t be — Kelly is a deliberate and thorough researcher, not prone to the kind of emotional decision making that torpedoed Gary Andersen’s career. So there could be more appraisal and discussion to come, with both sides open to letting this play out further.

Still, the fact that we are two weeks past Jim McElwain’s departure without a free-agent coach and a school with an attractive vacancy finalizing anything means that there could be room for another option for Kelly. Enter UCLA, which seemingly realized the opportunity and didn’t bother waiting another week to create its opening: