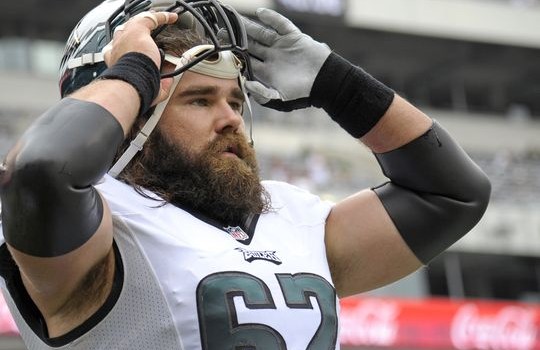 CHIP: ‘WE JUST GOT WHOOPED UP FRONT’ — NO KIDDING!

All-Pro center Jason Kelce was badly missed against the Niners.

So much for the notion that the Eagles’ second-string offensive line is good enough to hold the fort.

The Eagles offense couldn’t run Sunday against the San Francisco 49ers defense, and quarterback Nick Foles had one of his worst games as a passer.

The result was a 26-21 loss to the 49ers, with a final score that didn’t truly indicate just how ineffective the Eagles’ offense was. All of Philly’s scoring came on special teams — with touchdowns from a blocked punt in the end zone and a Darren Sproles punt return — or defense, with Malcolm Jenkins’ interception return.

The common thread to the Eagles’ offensive woes was an ailing offensive line that looks nothing like the line that was one of the NFL’s best last season, with center Jason Kelce out with surgery for a core injury, guard Evan Mathis sidelined with a knee injury, and tackle Lane Johnson finishing up a four-game suspension.

“We just got whooped up front,” coach Chip Kelly said. “We’re not very good up front right now. We’ve got a lot of guys banged up, and that’s not an excuse, it’s just the reality of it.”

An Eagles offense used to moving quickly and scoring fast couldn’t sustain drives. Seven of the Eagles’ 11 possessions lasted less than two minutes. Three of those ended with a turnover after less than a minute.

It means major strain on the Eagles’ defense, and plenty of rest for a San Francisco 49ers defense that endured a grueling week of practice preparing for Philly’s fast pace. With a fresh defensive front, led by defensive end Justin Smith, able to get consistent pressure on Foles, the 49ers’ secondary was able to successfully play its zone defense, something Foles had seen little of this season.

“It’s tough to grade him because I think a lot of times he had some pressure on him, but that’s going to be the case especially where we are right now,” Kelly said of Foles, who completed 21-of-43 passes for 195 yards, with two interceptions. “We’ve got to improve if people are just going to rush more. Maybe I’ll do a better job at picking them apart in zones, and doing some of those things. I don’t think anyone offensively did very well.”

The Eagles offensive line can expect a boost when Johnson is allowed to return this week after serving a four-game suspension for a violation of the performance-enhancing drug policy. Johnson, the No. 4 pick in the 2013 draft, started every game for the Eagles last season.

But that’s only one piece. Kelce underwent surgery to repair his stomach muscle tear this week and is expected to miss about two months, while Mathis continues to recover from an MCL sprain suffered in the Colts’ season opener.