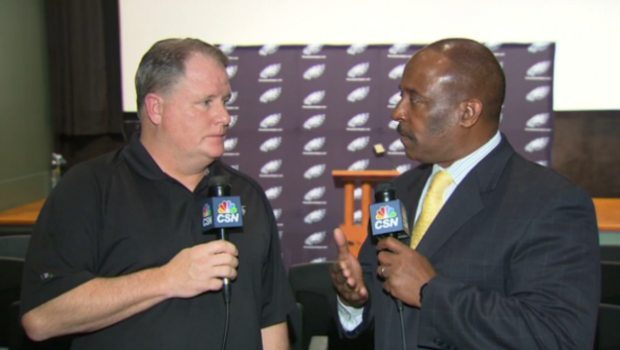 I hope you are not tired of hearing about Chip Kelly’s bromance with his former quarterback at Oregon, Marcus Mariota.

And just when we thought there was nothing new to say about it, here comes Comcast SportsNet’s great Derrick Gunn with an interview of the Eagles’ coach that actually elicited a new quote:

“Yeah, he’s a talented player. I mean a hundred drunks at a bar can tell you that he’s a hell of a quarterback. That wasn’t a question. The question was: What’s the cost? And to be honest with you, I don’t know if anything would have got Tennessee off of the pick. And I said the same thing. If I was in Tennessee’s situation I wouldn’t entertain any offers either. That’s how talented he is. So, they were right. If we coulda got a deal done because of how talented he is, yea. But I said that a month ago. People thought he’s just saying that to say that, but I never thought a deal would be done because I knew how talented he was and I know if I was in that situation I wouldn’t have made a deal either.”

DG: What about the weeks leading up to the draft?

“First time we ever talked to Tennessee was Wednesday … That’s why when you hear all these deals that are rumored just logically think about it. Why would anybody make a deal when you don’t even know who it is. Oh, we have a great deal for number two, and then he goes number one. So what happens to that deal we talked about three months ago? It just doesn’t work that way. Deals are made within 24 hours of the draft and most of the time are contingent upon if our guy is available on the clock so. I think it makes good print it makes good radio, but there was never any conversation with us and Tennessee until Wednesday and the conversation on Wednesday was let’s talk tomorrow.”