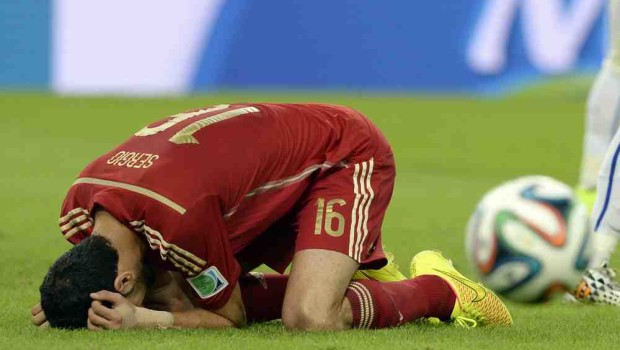 IN WORLD CUP, SPAIN’S REIGN IS ENDED BY CHILE

Reigning champion Spain was ousted from the 2014 World Cup by suffering a 2-0 defeat to Chile at the Maracana on Wednesday.

Spain was aiming to become the first nation to win consecutive World Cup titles since 1962, but back-to-back losses to open the tournament sent Vicente del Bosque’s men out of the competition before the start of the knockout round.

The Chileans picked up the impressive win behind two first-half goals as Eduardo Vargas struck in the 20th minute while Charles Aranguiz put Spain to the sword with a goal two minutes before halftime.

The result sees Chile and the Netherlands secure spots in the round of 16. The two nations, both on six points, will meet at the Arena Corinthians on Monday to determine first place in Group B.

Chile was more energetic from the start of Wednesday’s affair, and Jorge Sampaoli’s men got their just reward in the 20th minute when Aranguiz squared a pass to Vargas, who took one touch to side-step goalkeeper Iker Casillas before poking a shot into the back of the net.

Aranguiz went from provider to scorer two minutes before halftime when Mauricio Isla’s free kick was punched into the danger area by Casillas, allowing the Internacional attacker to stuff home the rebound.

Spain’s best scoring opportunity of the match fell to Sergio Busquets in the 53rd minute when the Barcelona midfielder found himself unmarked at the back post to meet a cross from Diego Costa, but he turned his effort wide of goal to spurn the chance.

Chile nearly added to its lead in the 68th minute by taking advantage of an errant pass from Busquets. Eugenio Mena led the counter and slid an inch- perfect pass to the back post for Isla, but the Juventus defender was unable to finish.

Sergio Ramos nearly pulled one back for Spain in stoppage time when he ran on to a loose ball across the box, but his scuffed shot was blocked by the Chilean defense, capping a miserable tournament for Spain.

The Spaniards had won their last three major tournaments, following a triumphant Euro 2008 campaign with successes in the 2010 World Cup and Euro 2012.

Spain was viewed as a strong favorite to become the first European nation to win a World Cup on South American soil, but it instead becomes the first reigning champion to lose its first two matches of the following World Cup.