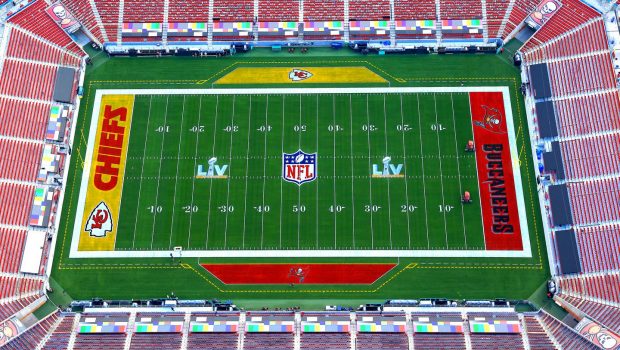 CHIEFS ARE 3-FAVES OVER BUCS IN SUPE: HERE ARE THE TRENDS!

Here are the Against The Spread and moneyline trends:

— The straight-up winner is 45-6-3 ATS (88.2 percent) in the 54 previous Super Bowls, and the ’dog has never covered a point spread without winning on a Super Bowl line of fewer than six points. This figure is now the highest of the four playoff rounds. Champions typically leave no doubt.

—Teams that scored more points per game during the regular season are only 5-13 ATS in the last 18 Super Bowls. The Buccaneers averaged 30.8 ppg to the Chiefs’ 29.6.

— The ability to run the football has been much overrated for Super Bowl success. Teams that averaged more rushing yards per game are just 4-12 ATS since ’05. The Chiefs rushed for 112.4 yards per game this season, the Buccaneers 94.9.

— Passing yardage has also meant little in terms of Super Bowl success, with teams owning an edge in total offensive passing yardage going only 8-11 ATS in the last 19 games. These were the top two passing teams in the NFL in 2020 with the Chiefs throwing for 4,854 yards and the Buccaneers 4,626.

Here are the Over/Under trends

— In the 53 Super Bowl games that have had totals, the Over is 27-25-1 (51.9 percent). The last two have gone Under, the first time for back-to-back Under results since four straight from 2005-08. The 2019 game between the Patriots and Rams went Under in record fashion, falling short of the posted number by more than 40 points.

— On average, 46.3 points have been scored per Super Bowl, with posted totals averaging 44.7. However, the early years’ totals were often in the 30s, dragging down that number significantly. The last 16 years have featured an average posted total of 49.7, with 46.9 scored. Nine of the 16 games in that era went Under.

— The 2020 Super Bowl was one of only 17 in which both teams reached the 20-point mark. Fourteen of those went Over. Consider that with the quality of offenses expected in this year’s game.