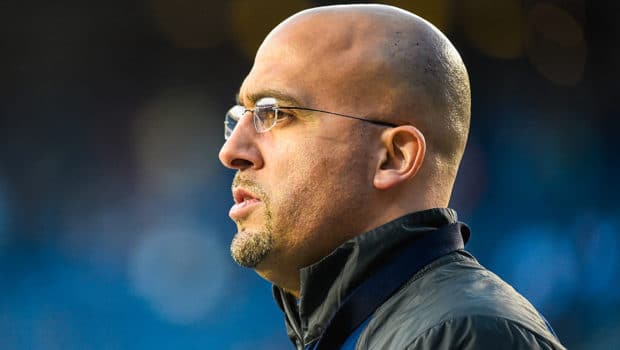 Yes, he has guided Penn State to No. 15 in the country and a 7-3 record this season. He has also led the Nittany Lions to a 2016 Big Ten title after building Vanderbilt into a winner.

Obviously, he is one heck of a recruiter. He owns a compelling personal story, too, having risen from humble beginnings and climbed the hard way up the sport’s coaching ladder.

There’s a reason, however, his peers voted him tied for college football’s most overrated coach.

And his clownish antics are exhausting. The biggest sports-media personalities in Philly and New York — guys who make a living sucking up to successful coaches — have called him a “fraud” and a “stooge” in public.

1. He had to be restrained from going after a Penn State fan earlier this season.

After PSU lost to visiting Ohio State by one point thanks to the worst play call in the nation this season — a 4th-and-5 hand-off when Penn State’s quarterback was dominating the Buckeyes’ D — Franklin took a jab step toward a fan who politely expressed disappointment as the coach was walking off the field.

Franklin issued an apology for his reaction afterward, but then threw his players under the bus with an inane (obfuscating?) monologue about being elite vs. being great. Never mind that every 12-year-old from sea to shining sea knew 4th and 5 was a passing down: