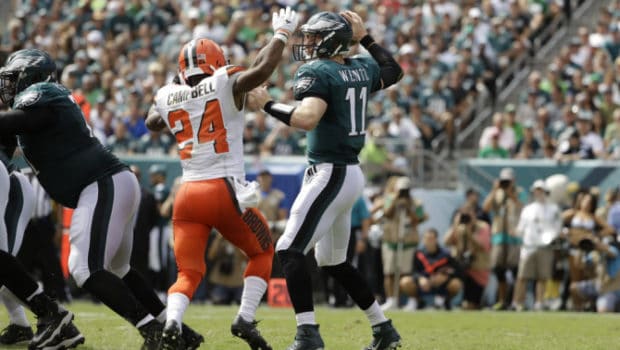 Eagles rookie quarterback Carson Wentz comes into tonight’s game against the Chicago Bears in Soldier Field with a lot of clippings and a target on his back.

Wentz not only won his NFL debut last week, but looked like a veteran in doing it.

He threw two touchdown passes with no interceptions, made a pair of clutch throws and was unfazed by pressure — he was 8-for-8 against the blitz last week in 29-10 victory over the Browns.

“He’s cool, man. But he hasn’t played us, yet,” Bears linebacker Danny Trevathan said. “I’m looking to make him real comfortable and just fly around him.”

The onus is the Bears’ defense to make Wentz look like a rookie after a disappointing performance against Brock Osweiler and the Houston Texans last week.

While the offense finds its legs with a make-shift offensive line introducing new pieces, it’s on the Bears’ defense to shoulder more than its share of the load in John Fox’s second season. That didn’t happen last week in a 23-14 loss to the Texans, as the Bears never put consistent pressure on Osweiler, working against a Texans offensive line that was pretty make-shift itself — only two returning starters, center Greg Mancz making his first NFL start and back-up Chris Clark starting for Duane Brown at left tackle.

“It was average,” defensive coordinator Vic Fangio said when asked about the pass rush against the Texans. “There were a couple of times where the quarterback scrambled to convert some third downs, which hurt — so we need to be better there.”

At this point, Fangio is the most valuable member of the Bears defense, charged with turning a no-name, star-less group into a force that sparks the Bears’ transition from also-ran to playoff contender.

None of the Bears defenders has been to a Pro Bowl. Their big veteran additions in the offseason — defensive end Akiem Hicks and linebackers Trevathan and Jerrell Freeman — were complementary players on their previous team.

Trevathan has a Super Bowl ring with the Broncos; outside linebacker Willie Young has 16 1/2 sacks in the last two years; cornerback Tracy Porter clinched Super Bowl XLIV with a fourth-quarter pick-six against Peyton Manning — that’s most of the chachet on this defense.

After that, it’s a lot of potential — second-year nose tackle Eddie Goldman, rookie outside linebacker Leonard Floyd, second-year safety Adrian Amos and others who have to make big jumps this season.

Tonight’s game against the Eagles is as much opportunity as it is a challenge.

Wentz was impressive in his debut, but still is a rookie making his second NFL start. Of the 20 rookie quarterbacks to start in Week 1 since 2000, only the Ravens’ Joe Flacco has won his first two starts — and he did it without throwing a touchdown pass, with two interceptions and passer ratings of 63.7 and 47.8 in victories over the Bengals and Browns. The only one to post 100-plus passer ratings in his first two starts was the Bengals’ Andy Dalton in 2011.

The trick, though, is … that aggressiveness with discipline. If you try too hard, you might be the guy learning the lesson — espcially against a quarterback like Wentz, who can burn an over-aggressive defense with his mobility.

“Just don’t take ‘em lightly,” said Porter, who is in his ninth NFL season. “We know they’re young guys. We know they’re going to make their mistakes. We have to be sound in our coverage as well as our rush lanes, so we give him tight windows to throw in and if he makes a mistake we can make him pay.”

Wentz’s effectiveness against the blitz didn’t make a particular impact on Fox or Fangio.

“He was just efficient no matter what they were doing,” Fangio said. I didn’t see anything special either way.”

“They played the Cleveland Browns [last week] — I can’t relate to how it’s going to be against us,” Fox said. “On tape last week he executed very well, especially for a rookie.”

Wentz’s performance against the Browns was impressive, but he’s still a rookie and likely susceptible to making rookie mistakes like any first-year quarterback. It still takes a pretty good defense to do that, though. So this might be a bigger test for the Bears defense than for Carson Wentz.

“You want to create havoc with all quarterbacks, but you have those that cant really handle pressure well,” Trevathan said. “Can’t give away too much, but at the same time, you’ve got to know who you’re playing against and notice how they handle certain situation. And you’ve got to prepare for it.”