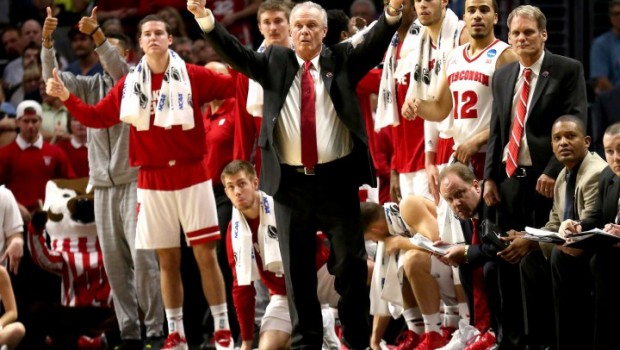 If you’re Bo Ryan, a kid from Chester who learned basketball at your father Butch’s knee, these are the best of times.

He’s got the Wisconsin Badgers one game away from their second straight trip to the Final Four, and he’s doing it his way.

Ryan spends about as much time combing through high school basketball rankings as he does worrying about preseason predictions.

“It’s just so overrated,” the Wisconsin coach said Friday on the eve of the top-seeded Badgers’ NCAA Tournament West Region final against No. 2 Arizona at Staples Center in Los Angeles. “It’s for people to make money for jobs and to justify what they do in their rankings.

“Come on. You don’t want to get me started on that stuff.”

Clearly, it’s not his favorite topic.

The only significant Wisconsin contributor who was highly rated out of high school was Sam Dekker, a five-star recruit. National Player of the Year candidate Frank Kaminsky was a three-star prospect. So were guards Traevon Jackson and Josh Gasser. Sophomore guard Bronson Koenig was a top 100 player and a four-star recruit, but Ryan said he doesn’t look at such numbers when evaluating a player.

Gasser only landed a Wisconsin scholarship when another recruit de-committed. Jackson wasn’t being recruited by many Big Ten schools, but Ryan liked his court awareness and toughness. Kaminsky was a late bloomer who did have scholarship offers from Bradley, DePaul, Northern Illinois, Northwestern and Southern Illinois.

They all have one thing in common: They wanted to be a part of the program at Wisconsin and had no issue with working for everything. There’s no other option when playing for Ryan.

“If you look at the Wisconsin program as a whole, that’s what coach recruited,” Kaminsky said. “He recruited guys that want to come in and work hard and make something of themselves. And I think Josh and I especially came in with not a lot of expectations, but we were able to work hard and put ourselves in positions to play well in this program. It definitely didn’t happen overnight.”

When Ryan recruits a player, he makes sure to get to know the kid, get to know his family, his high school coach and his friends. He wants to see how he interacts with those around him — because that may reveal how he will handle being pushed, prodded and challenged — and his response when adversity hits. Each recruit matters more to him than how many stars are next to his name.

“When I was an assistant, I was always known as the guy who would talk to the filling station person, the grocery store [clerk], anything within that kid’s block or his neighborhood, I would talk to them all,” Ryan said. “It’s amazing what you can learn.”

Ryan, however, doesn’t deal with handlers or advisers, hangers-on who have become so much a fabric of grassroots basketball, the go-between people who are often attached to high-level prospects.

“I might be the only head coach at a Division I school who does not deal with third parties,” Ryan said.

Maybe more coaches should follow his example. It’s working out for Wisconsin.