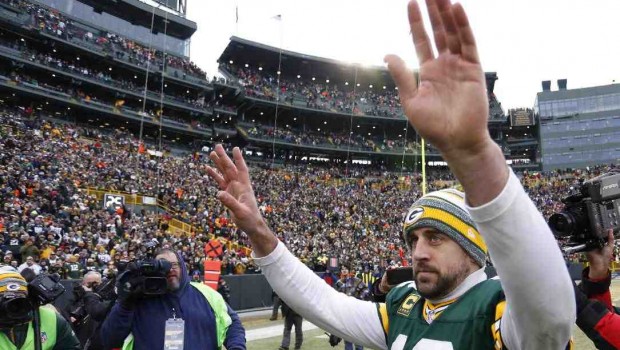 HOW THE CHEESE-HEAD PACKERS SLIPPED BY THE TURKEY COWBOYS

Eagles fans who watched the Cowboys-Packers divisional playoff game with a sense of, “We should have been in that game!” — get over that.

Both Aaron Rodgers of Green Bay (photo above) and Tony Romo of Dallas are way better than any QB the Eagles put on the field this year.

It’s just another reminder of what the Birds need to do to get into a game like this in 2016.

After last week’s Cowboys playoff game was easily reduced to a game-changing questionable call, this week’s edition was even further boiled down to your opinion of the biggest decision of the divisional round,

Dez Bryant’s 31-yard reception on fourth-and-2 that was overturned upon replay review. On the surface, the story was the same. Break down the play and what it meant even further and you see that everything was different.

Of course, the obvious difference is who benefited from the call. Last week, it was the Cowboys who reaped the rewards from the decision to pick up the flag thrown on Anthony Hitchens for pass interference. This time around, the Cowboys were the ones on the short end. Depending on how capable you are of constructing conspiracy theories, a crucial call going against the Cowboys either proves the NFL was trying to cover up last week’s obvious plot to fix the playoffs in favor of Dallas or suggests that the Packers have a way cooler party bus for Dean Blandino than the Cowboys did.

More realistically, the most meaningful gap between the call made by Pete Morelli’s crew and the decision made by Gene Steratore’s all-star group this week is the accuracy. Morelli got the call wrong; he wiped away a penalty on Hitchens that should have stood, either as pass interference or defensive holding. Steratore’s call, as made upon review, was the correct one. By the letter of the law, Bryant didn’t maintain control of the ball when he hit the ground. That’s an incomplete pass, and while it took a Packers challenge to get the call right, the system worked as it was supposed to. The only disagreement I can imagine is if somebody wanted to argue that the evidence wasn’t overwhelming enough to overturn the call, which I would say is debatable.

This time, Bryant’s would-be catch was the biggest play of the game. When it was initially ruled a catch, the Cowboys became favorites to win the contest. After being down five and facing fourth-and-2 from the Packers’ 32-yard line, they now had possession on the 1-yard line with a new set of downs and 4:42 to go. The AFA model leaves the Cowboys with about a 55 percent chance of winning.4

Instead, when the call was overturned, the Cowboys were down five, minutes away from receiving the football, and likely stuck overcoming about 80 yards of field position if they even found a chance to return a punt. Their chances of winning after the call was overturned were somewhere in the 15 percent range, for a win expectancy swing of 40 percentage points. Indeed, when the Packers picked up a pair of third-down conversions on throws to Davante Adams and Randall Cobb, it meant the Cowboys offense would never touch the ball again.

The furor over the call masks a stunning second-half effort from Aaron Rodgers, who turned things on after looking limited during an inconsistent first half. Rodgers’s now-infamous calf didn’t appear to have healed all that much, with the MVP candidate struggling to step into throws, notably sailing a couple of corner routes to Cobb that should have been completions. The Packers took 26 of their 65 snaps in the pistol and put Rodgers under center for just the final three kneeldowns of the game, but they were unable to rely heavily on Eddie Lacy, who gained 45 yards on the opening drive before missing much of the first half because of an asthma attack.

After halftime, though, Rodgers seemed to ignore his limitations and play like his usual self. While he needed to skip to the line of scrimmage at times during the first half, Rodgers settled down and delivered one of the best halves he’s ever produced in the playoffs, going 15-of-20 for 226 yards with two touchdowns. He found a target in Cowboys cornerback Sterling Moore, who was beaten by Cobb and, more notably, Adams. Adams ran a dig route past Moore for the 46-yard touchdown that brought the Packers within one point, and when Green Bay was up late and needed a third-down conversion, it was Adams who dragged a Rodgers pass away from Moore and shoved him aside to pick up 26 critical yards.

Like the Ravens, the Cowboys might have been able to seal up the game before the Bryant non-catch with a couple of breaks on fumbles earlier in the contest. While each team recovered three fumbles, the Packers picked up what might have been the two biggest fumbles of the contest, both in the second half. The first was when Julius Peppers stripped DeMarco Murray on an off-tackle run in the third quarter, with Datone Jones recovering for the Packers. It was disheartening to see fumble woes return for the otherwise excellent Murray, but Cowboys fans had to have been more upset with the context. While losing the ball on the 42-yard line is relatively innocuous, Troy Aikman noted that Murray had nothing but daylight in front of him and would have probably scored if he got past Peppers, who shed All-Pro guard Zack Martin to force the fumble and was wonderful all afternoon.

Then, after Tony Romo led a six-play, 80-yard drive to put the Cowboys up by eight points in the third quarter, Cobb fumbled on the ensuing kickoff. Green Bay was lucky to come away with a recovery — if Dallas had fallen on the football, it almost surely would have gone up by a minimum of 11 points, which would have totally changed the tactics for each team. The Cowboys might have had a shot to run out the clock with what had been a very effective running game in the fourth quarter instead of needing to throw to catch up. Instead of Dallas going up 24-13 or even 28-13, Green Bay recovered the football and quickly drove 90 yards for a touchdown to make the score 21-20. From that point forward, the game was a crapshoot.