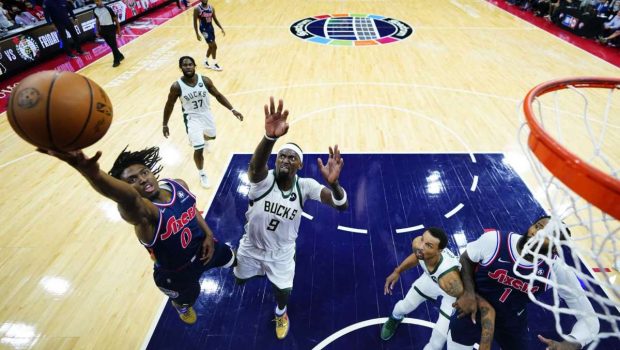 CHEERS FOR BLUE-COLLAR SIXERS EVEN THOUGH THEY LOST TO BUCKS!

Giannis Antetokounmpo had 31 points and Grayson Allen 25 as the Milwaukee Bucks held off the short-handed Sixers 118-109..

Tyrese Maxey scored 31 points for the 76ers, who played without four-time All-Star Joel Embiid for the second straight game. Embiid was one of four 76ers out due to the NBA’s health and safety protocols, along with Tobias Harris, Matisse Thybulle and Isaiah Joe.

But the 76ers left the court in defeat to applause from the normally demanding home crowd, which recognized the strong effort put forth by a Philadelphia team that started Shake Milton, Maxey, Furkan Korkmaz, Paul Reed and Andre Drummond.

”The energy in the arena is unreal,” said Georges Niang, who scored 21 points off the bench.

Still, Niang is looking for more than moral victories.

”I think everybody’s here to win,” he said. ”We know we’re short-handed, but we have to clean up some things in the fourth quarter.”

”Grayson did a great job of getting to the right spot,” said Antetokounmpo, who assisted the key basket.

The Bucks led by eight early in the third on George Hill’s follow shot, but Philadelphia didn’t wilt. The 76ers went ahead 90-89 on Danny Green’s 3-pointer with 1:49 left in the third and finished the period in front 93-91 thanks to Drummond’s tip of Maxey’s miss with 1.5 ticks remaining.

Drummond had 17 points and 20 rebounds, and Milton scored 20 points.