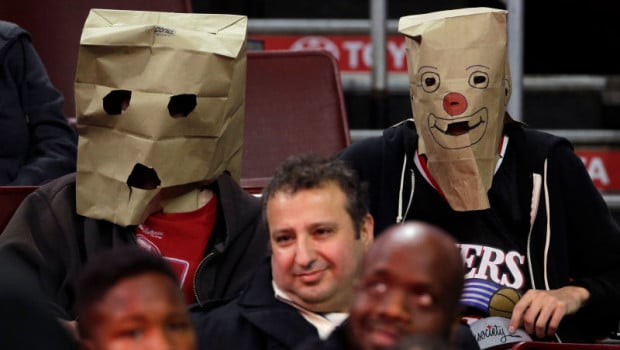 Do you think the Sixers are really bad?

Just kidding. Wanted to make sure you were paying attention.

Once again, some of them are wearing bags over their heads, the universal expression for “Our team stinks, but we’re dense enough to buy tickets anyway.”

Perhaps it is gallows humor that’s leading Philly fans to proudly, though falsely, proclaim the Sixers’ 1-26 start to be the worst in NBA history. Citing the Sixers’ 2-23 start last season, Philly fans also are under the delusion that they are enduring the most ghastly two-season run ever.

Have fans and the media, in Philly and nationally, forgotten about the 1992-94 Mavericks, who in successive seasons reached the midway mark at 3-38 and 2-39?

Last season’s Sixers rallied to an 8-33 record by the midway point and finished with 18 wins. The Sixers would have to win five games or fewer the rest of this season to match or exceed the Mavericks for sustained awfulness.

Dallas’ overall sports image no doubt was buoyed by the Cowboys’ three Super Bowl victories in four seasons, but at least one avid Mavericks fan from those days has another theory of why the current Sixers are perceived as historically horrid while the early-’90s Mavs are somewhat forgotten.

“It’s different because of social media,” says that fan, Mark Cuban. “You just read about it [in the early ’90s]. ESPN wasn’t broadcasting games. There were no regional networks. So you didn’t live it every game, like you do now.”

Cuban, 57, was in his mid-30s then, having come to Dallas in 1982 fresh out of Indiana University and virtually broke.

He came to Reunion Arena to watch the Mavericks as often as he could, starting in the nosebleed seats and gradually moving closer to the court as his financial status improved.

Meanwhile, after a 1988 run to the Western Conference finals in 1988 and first-round ouster in 1990, the Don Carter-owned, Norm Sonju- and Rick Sund-run Mavericks decided to strip down the roster and accumulate draft picks.

Much like Philly has done the last three seasons.

In an effort to land Shaquille O’Neal or Alonzo Mourning in the draft, the 1991-92 Mavericks lost 22 of their last 27 games but won their last two and swapped lottery odds with Orlando. The Magic got O’Neal. Dallas got the No. 4 pick, Jim Jackson.

The current Philly team is 0-15 on the road — but still five losses shy of the NBA record for worst start, set by the 1992-93 Mavericks under coach Richie Adubato. That Mavericks team won three of its last six games to avoid tying the 1972-73 Philadelphia team’s NBA-record-worst 9-73 mark.

“I remember vividly, that was the year they beat Minnesota at the end of the season to not tie the record,” Cuban says. “I was on a road trip for my company. I remember being in a hotel bar, watching the game and going nuts.”

The following season, 1993-94, Cuban was busy founding Audionet with fellow Indiana alum Todd Wagner, so he doesn’t recall much about that year under first-year-coach Quinn Buckner.

That was supposed to be a season of promise, with Jackson playing his first full season after holding out most of the previous year and the addition of No. 4 pick Jamal Mashburn.

“But you’re talking about young guys,” Harper says. “Young, inexperienced guys. When you look at what we were putting out there, we just weren’t good enough to win games.”

That season’s Mavericks won their fourth game, 115-99 at Minnesota. When Dallas lost at home the following night to Utah, 101-100, no one could have fathomed it would start a 20-game losing streak.

That 20-game home losing streak remains the NBA record, both to start a season and overall. Philly fans, you have to admit that it takes a special caliber of atrociousness to accomplish that.