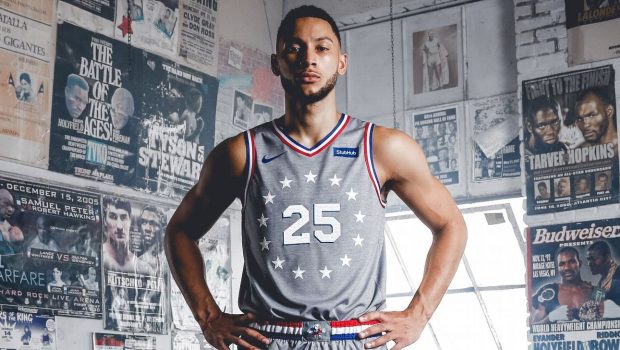 CHEER UP, BENNY: CHECK OUT THE SIXERS’ NEW UNIS!

The Sixers may have gotten their doors blown off last night in Toronto.

But they rolled out their new unis yesterday.

So call it a wash!

The Sixers’ 2018-19 City Edition uniform celebrates the city’s rich history of the challenger’s mentality that inspired the “Rocky” and “Creed” films.

The uniform’s core displays the iconic circle of 13 stars derived from the boxing ring where Rocky Balboa first squared off against Apollo Creed, while the gray sweatsuit-textured base was influenced by both Adonis Creed’s and Rocky’s legendary training scenes throughout the streets of Philadelphia. The crisp blue, red and white waistband trim on the shorts is inspired by Rocky’s championship belt. Meanwhile, the phrase “PHILADELPHIA, USA,” is embroidered on the lower left hem of the jersey as a nod to the city’s fans, heart and determination.

City Edition uniforms will be available for purchase on Nov. 9 online at www.SixersShop.com and in-arena stores.