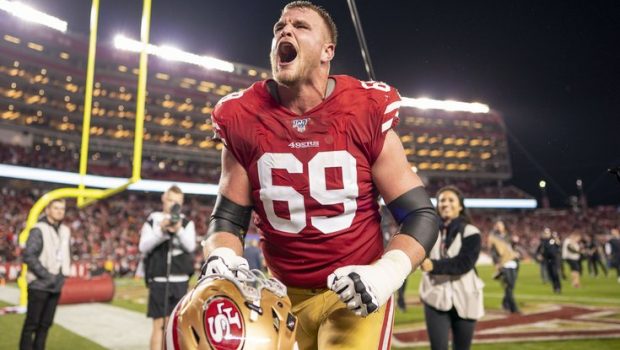 CHECK OUT THE PHILLY CONNECTIONS TO THIS SUPER BOWL!

The 49ers offensive line relies on McGlinchey. The No. 9 overall pick in 2018 was born in Philly, grew up in Warrington, went to Penn Charter and Notre Dame and prefers his cheesesteaks from Dalessandro’s.

“Everything I do, everybody I love, is back at home in Philadelphia,” McGlinchey said at the 2018 combine.

McGlinchey rooted against the Eagles in the divisional round in January 2018 because his cousin is Falcons quarterback Matt Ryan, but he jumped back on the bandwagon for the rest of the playoff run. His friends sent him pictures and video of celebrations on Broad Street after the Super Bowl victory.

“There’s not a lot of places like Philadelphia, where you can get people that are as close, as passionate, and are willing to say whatever the hell they want right to your face,” McGlinchey said. “So it’s one of those things, it taught me who I was. It’s where my roots are. It’s ingrained in my family, the way that we were raised. The competitiveness, the passion I have for this sport, and the loyalty that Eagles fans have for their team and the rest of their sports teams in Philadelphia, makes you, for the ones you’re playing for, have that much loyalty, too.”