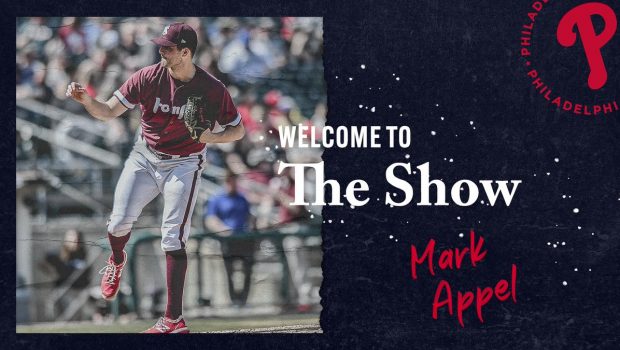 Former No. 1 overall pick Mark Appel, who’ll be 31 in July, made his major debut last night and pitched a scoreless ninth inning for the Phillies.

At 30 years and 349 days, Appel — whose baseball career included a three-season absence from the sport — is the oldest former top overall pick from the June draft (since 1965) at the time of his MLB debut.

The right-hander allowed one hit and recorded a strikeout as the Phillies lost to the Atlanta Braves 4-1.

Appel was picked No. 1 overall by the Houston Astros in 2013 and was part of a trade to Philadelphia in 2015. Due to injuries and ineffectiveness, Appel left baseball in 2018 before coming back to the Phillies organization in 2021.

Appel has spent the past two seasons pitching in Double- and Triple-A for the Phillies. He has a 5-0 record and 1.61 ERA in 19 appearances for Lehigh Valley this season, and earned a promotion to the majors last Saturday.

The journey was part of what made Wednesday night so special, and Appel admitted he became extremely emotional as he walked off the mound thinking of it all.

“Having perspective and remembering even just two, three years ago,” he said, according to MLB.com. “Even if I was just trying to come back, it’s never been a straight line for me. Even in that whole process, I was lost. I felt like there were times when I was hopeless, that this dream would never happen. So yeah, I was choking back tears.”

The magnitude of the moment was not lost on his teammates.

“It was just really cool to see it all culminate, him running in from the bullpen,” Rhys Hoskins said. “I kind of snuck a peek at him a little before second base. Just a grin, right? You just can’t keep it in.”

One of the most decorated pitchers in NCAA history, Appel was drafted eighth overall by the Pittsburgh Pirates in 2012, but he returned to Stanford for his senior season and the Astros selected him first in 2013, one spot ahead of Kris Bryant.