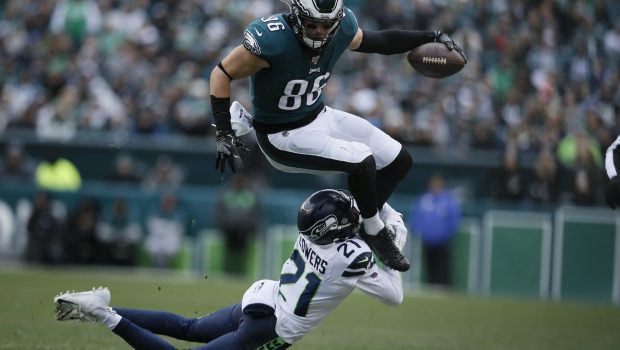 Cox, who has come back from last January’s toe surgery, had 10.5 sacks in 2018, but just 3.5 this season. Still, this will be his fifth straight trip to the Pro Bowl, which will be played on Jan. 26 in Orlando, Fla.

“I would say this about Fletch,” said Eagles defensive coordinator Jim Schwartz, “there have been a lot of plays that his teammates have made as a result of him either getting extra attention or being disruptive and someone else has made the play. But when it’s all said and done, really doesn’t matter who is making the play. It’s a matter of getting stops and keeping points down and getting wins.”

Brooks and Ertz were named to their third straight Pro Bowl.

Brooks went into the offseason having to undergo surgery to repair a torn Achilles suffered in mid-January. Brooks attacked his rehab, though, and was able to return to the lineup for the season opener, less than eight months after the surgery.

Ertz followed up his NFL-record setting reception record by tight ends with 116 by having a season that has produced 84 catches for 888 yards and six touchdowns. He has done it despite an offense that has been hit hard with injuries to its receiving corps, which has led to Ertz having to often beat double teams in the pass game.

Kelce will head to his third Pro Bowl and first since 2016. He is the only member of the Eagles offense who has played every snap this season, all 1,037 of them.

This will be Lovato’s first appearance.