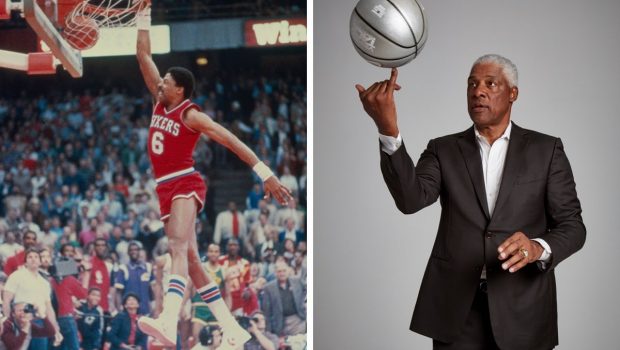 It was 1976, the ABA’s last season before the merger with the NBA, and Erving, of the New York Nets, started by dunking two balls from under the rim, then moved out to the center of the court. A piece of tape had been put down near the bottom of the foul circle, indicating where players had to jump from, but Erving plotted out his steps, then lept from the foul line instead, drawing arguably the loudest cheers of the night.

“He walked up to the free-throw line and started marking these steps off, going back to the other end of the court,” Ron Boone, a Spirit of St. Louis All-Star in ’76, told the Houston Chronicle. “Well, you knew what was coming — ‘Oooh, he’s going to take off from the free-throw line.’ Everybody was on the edge of their seats watching. The anticipation was great.

“Then he went and took off,” Boone continued. “His afro was big then, and it was blowing. He went up and threw that baby down and the crowd went crazy.”