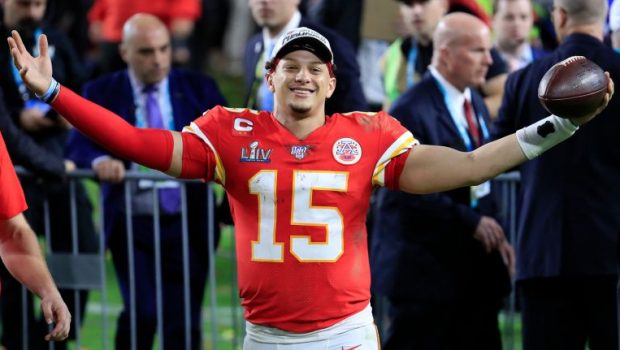 CHECK OUT MVP MAHOMES 4TH-QUARTER COMEBACK FOR THE AGES!

With 8:33 left in the game, Patrick Mahomes went to work.

He found wide receiver Tyreek Hill open in space on multiple occasions, including on a 44-yard bomb that set the Chiefs up in position to score for the first time since early in the second quarter. He then found tight end Travis Kelce open over the top of the defense, but Kelce was interfered with and the ball was placed on the 1-yard line. A fake to running back Damien Williams and a bit of a rollout left Kelce wide open in the end zone on the next play, and the Chiefs had sliced their deficit to just three points.

After the Kansas City’s defense stepped up with a crucial three-and-out, 49ers punter Mitch Wishnowsky short boot left the Chiefs with solid field position at their own 35-yard line. Again, Mahomes went to work. He found Hill and Kelce for a few short gains and then nailed wideout Sammy Watkins for a long one, once again putting the Chiefs in scoring position. Mahomes took a bad sack on second-and-goal from the 4-yard line, but on third down, he found Williams in the flat. Williams did the rest, out-running a defender, turning the corner, and reaching the ball toward the pylon.

Despite trailing for more than 21 minutes of game time, the Chiefs finally reclaimed the lead. They never relinquished it. In fact, they only added to it with Williams tacking on another score with 1:12 to play as Kansas City was simply attempting to run out the clock for their first Super Bowl victory in half a century.