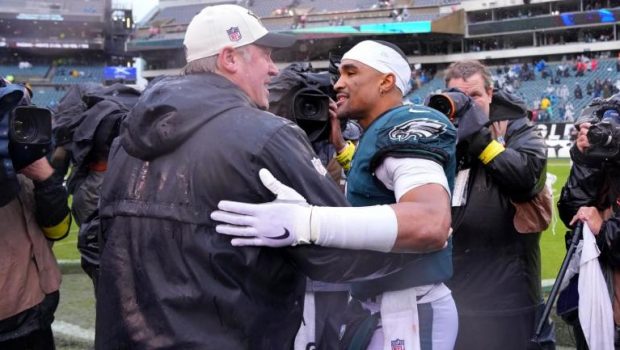 Doug Pederson did his best to downplay his homecoming to Philly all week.

And he got a standing ovation yesterday when he was introduced as Jags coach yesterday at the Linc.

In the aftermath of the Jacksonville Jaguars’ 29-21 loss to the Eagles, Pederson still tried to deemphasize his return to the stadium where there’s a statue that sits in the Pepsi Gate in the north end zone for the fans to see. When a coach does enough for a city, it’s hard to completely turn the page.

From the players to the media, Pederson was beloved in a city starving for a Super Bowl championship. He certainly earned the respect of the players who suited up in midnight green for all five years when he was the head coach. Fletcher Cox and Brandon Graham chatted with their former coach for several minutes before the game, giving him the same love he showed them during his time in Philadelphia.

Jason Kelce was able to get Pederson’s Jaguars coat as a gift, something he proudly showed off in the Eagles locker room. The biggest compliment of all came from Jalen Hurts, who only played for Pederson for one season — albeit a special one.

If it wasn’t for Pederson and his knowledge of quarterbacks, Hurts isn’t in a Philadelphia Eagles uniform. As the two hugged at midfield, Hurts had some powerful words for his first head coach in the NFL.

“I told Doug, ‘I really appreciate you and have a lot of respect for you.’ And I told him, ‘I thank you because you’re the reason I’m here,'” an emotional Hurts said after the game. “I have a lot of love and respect for him. His way of coaching, his coaching style and the way he does things, the great things he’s doing in Jacksonville right now.

“I have a lot of respect for him and I wish him nothing but the best moving forward.”

Standing ovation here for #Jaguars head coach Doug Pederson who was introduced to the crowd here in Philly.

Pederson of course led the Eagles to a SB win in 2017: pic.twitter.com/9luF0T5XeZ