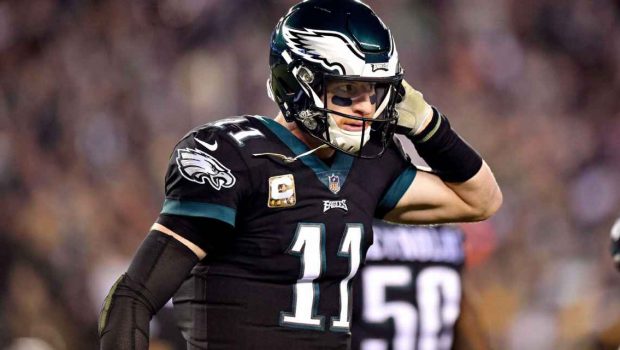 As rated by CBSSports.com:

The health of Carson Wentz has turned into a major and very real concern. A year after tearing up his knee, Wentz suffered a back injury (uh oh) that ended his 2018 season. Wentz’s unfortunate injury history hasn’t hampered the Eagles over the past two seasons because of the presence of Nick Foles, but Foles is expected to depart Philadelphia this offseason, which means the Eagles might not have the best insurance plan in football anymore.

The thing is, before Wentz went down, he was improving his completion percentage, yards per attempt, and passer rating from his near-MVP 2017 season. If he can stay healthy, the Eagles are the clear frontrunners in the NFC East, but at this point, it’s fair to question if he can stay healthy over the course of an entire season.

The Eagles fell to eighth largely because the seven teams positioned ahead of them are all damn good teams and because the Eagles are coming off a nine-win season that saw them rank 15th in DVOA with a plus-19 point differential.

They’re also in salary cap hell, which means some cuts could be coming. Brandon Graham, Golden Tate, and Chris Long are all impending free agents, per Spotrac. They likely won’t be able to keep all of them.

The Eagles, though, are above the Cowboys because they’ve got the clear advantage in coaching and at quarterback — if Wentz can stay healthy.