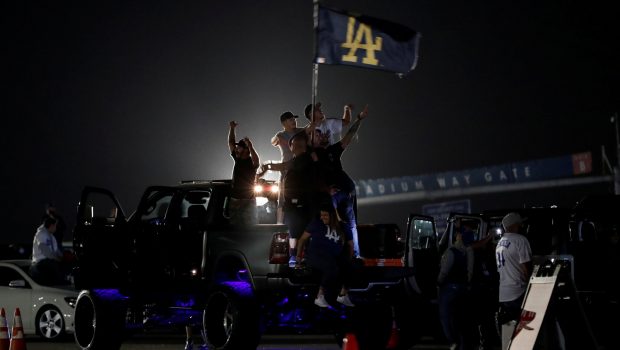 A celebration in downtown L.A. turned chaotic as people were seen storming a large semi-truck and taking boxes before the truck was able to drive away. Fans were seen inside the trailer of the big rig and others climbed on top of the trailer.

LAPD tweeted several street closures were in place and asked the public to avoid the downtown area while they were “dealing with a large, and at times unruly” crowd.

Fans stormed a semi-truck in downtown L.A. after the Dodgers won the World Series.

Landmark buildings in Los Angeles, including City Hall and the pylons at LAX, were lit blue to support the Dodgers.

There is not expected to be any official parade or group celebration of the win, just as there was none for the Lakers, because of COVID-19 restrictions on gatherings.