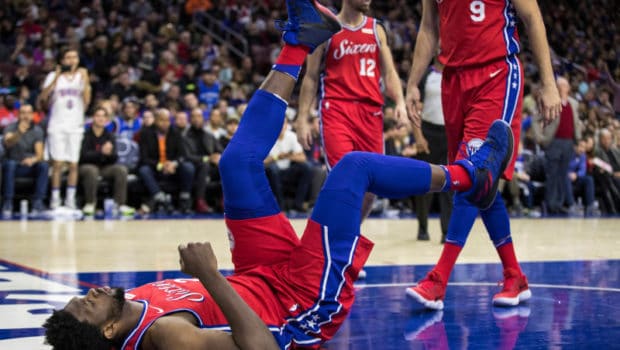 CHECK OUT DUMB-ASS DEADSPIN’S TAKE ON THE SIXERS!

Belief that the Sixers will reverse the current direction of their season rests upon faith that they will have better injury luck in the second half of the season than they’ve had in the first, and that the in-game experiences gained by their young stars will accrue nightly to the benefit of the team’s overall performance. But doesn’t that strike you as, um, optimistic? A player like Joel Embiid, with his history of big man injuries, would seem more likely to break down over the course of his first extended stretch of NBA games, rather than come into more stable health. And young players tend to slip down the stretch of their rookie seasons—the “rookie wall” is a thing you’ve heard of for that very reason. So the Sixers might have better luck with health, and their players might become savvier NBA players, but fatigue and general wear could more than cancel out those gains.

The Sixers have at least two of the, say, 12 most exciting players in the NBA, and they play a wildly telegenic brand of basketball. Their early season performance has been encouraging, so long as your expectations have been remotely realistic. If Embiid plays another 35 games this season, and Ben Simmons continues to put up Rookie of the Year numbers, and Markelle Fultz returns from the shoulder issue and gives the team a glimpse of intact potential, and the Sixers play anything like .500 basketball the rest of this way, their 2017-18 campaign will have been an enormous success. A playoff berth, at this stage of their development, would be a bonus: