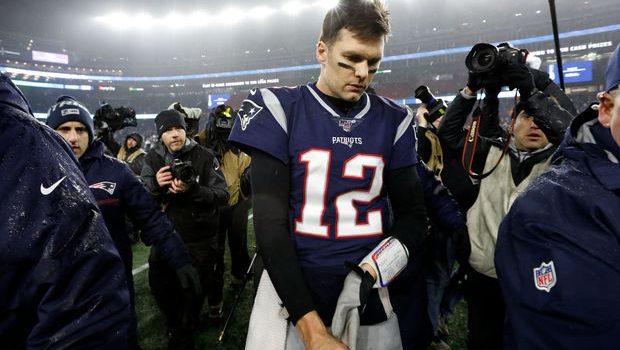 Tom Brady completed 20 of 37 passes for 209 yards and no touchdowns in New England’s 20-13 loss to Tennessee, a performance in keeping with a season in which he declined statistically, perhaps because he didn’t have as strong as supporting cast as in other years.

His contract will expire March 18, and whether the Patriots and coach Bill Belichick will make a large commitment to a 42-year-old who struggled to connect with young receivers remains to be seen. “Right now we just finished the game,” an all but inaudible Belichick said, refusing to address the issue.

Brady may want more money than they can offer. He may want a fresh start, with more weapons. He too, was noncommittal. “Who knows what the future holds, I’ll leave it at that,” Brady said.

Only this much was certain: a long great run was over and it was a stale, painful ending. “No one needs to make choices at this point,” Brady said.

Brady and the Patriots have made winning such an expected outcome over two decades that we, and perhaps they themselves, became a little numb to it. Think about the physical and mental toll of reaching eight consecutive AFC Championship games and four of the last five Super Bowls, winning three of them. It was an insane rate of success in a sport that is brutal and constantly shifting given free agency. In retrospect, it was unsustainable. They had to have a letdown eventually, and this was it. If nothing else, they had to be worn out from all that winning.