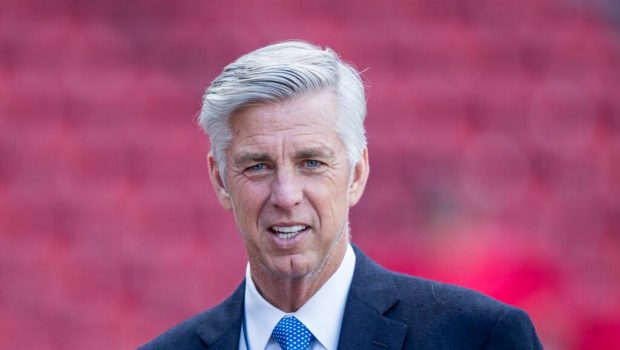 ON DOMBROWSKI, PHILS OWNER WOULDN’T TAKE NO FOR AN ANSWER!

The Athletic’s Jayson Stark got inside the Phils pursuit of Dave Dombrowski:

On that Saturday morning, Dec. 4, Phils owner John Middleton had an idea. He asked president Andy MacPhail to reach out to Dave Dombrowski a third time. What could go wrong?

But like the previous two pitches, this would turn into yet one more swing and a miss. It should have been strike three, inning over. Except this time, Middleton wasn’t ready to take “no” for an answer. He said to MacPhail: “Tell Dave I want to talk to him. If I’m not going to get this guy, I want to take a swing at it.”

So MacPhail left a message for Dombrowski, just to let him know Middleton’s call was coming. But by the time it did, late in the day Monday, Dombrowski and his wife were in the middle of a Christmas event, so he couldn’t pick up. He called back the next morning.

Dombrowski and Middleton wound up speaking for more than an hour. They’d known each other for years. But they’d never had a conversation like this. Among the topics was this game-changer:

“Dave,” Middleton said, frankly, “I don’t think expansion is going to happen for a long time.”

Just the day before, in one of his periodic conversations with the commissioner’s office about the situation in Nashville, Dombrowski had heard a similar take. It got him thinking.

Middleton suggested he reach out to the commissioner’s office again and get as much information as he could. But before he hung up, he had one more question for Dombrowski:

“If the only thing that comes out of this call is you being open-minded about our situation, I’d consider it a success,” Middleton said. “So are you at least open-minded?”

“I can honestly tell you,” Dombrowski replied, “that I’m open-minded.”