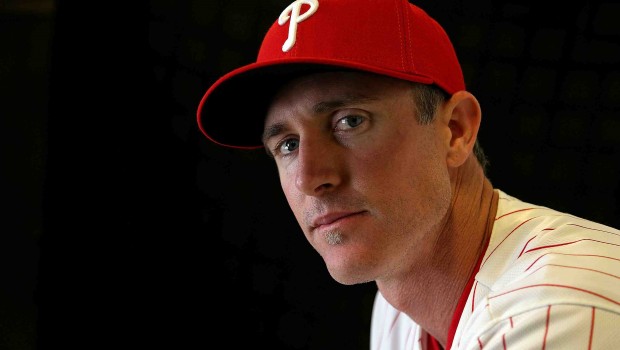 IS CHASE UTLEY ON THE ROAD TO RECOVERY AT THE PLATE?

Chase Utley is 3-for-6 with two doubles and two RBIs in two games since Phillies manager Ryne Sandberg dropped him from third to sixth in the Phillies’ lineup.

Utley went 2-for-3 with one double and two RBIs in Saturday night’s 7-5 victory over Arizona at Citizens Bank Park.

“Nothing different,” Sandberg said. “He’s hitting balls away from the glove and defense. It’s good to see.”

It was Utley’s second multi-hit game of the season and his first since April 14, when he homered twice and had three hits against the Mets at Citi Field.

Utley singled to center field in the third inning Saturday to score Grady Sizemore to hand the Phillies a 3-0 lead. He doubled to score Maikel Franco in the fifth to make it 5-3. Arizona right-hander Addison Reed intentionally walked him in the sixth to face the right-handed-hitting Jeff Francoeur.

There has been plenty of discussion about Utley because his struggles have extended for nearly a year. He has hit .217 with 17 doubles, three triples, 10 home runs, 69 RBIs and a .612 OPS in 587 plate appearances since May 29.Could Utley abruptly retire like Mike Schmidt in May 1989? Could the Phillies bench Utley to prevent him from reaching 500 plate appearances this season, which would automatically vest a $15 million club option for 2016?

Utley left the clubhouse almost immediately Saturday night and was unavailable to comment.

But Utley has run into some bad luck. His .118 batting average on balls in play entering the game was 178 points below the game’s average and 182 points below his career average.

“I thought he’s looked really good,” Sizemore said. “It’s a small sample of what we’ve seen. 120 or 130 at-bats isn’t a lot for anybody. So we can’t get too carried away with what anybody’s doing right now. A couple things fall here or there it’s a different story.”

In other words, Utley might not be the player he once was, but he is not a .138 hitter, either.”

In Utley,” FiveThirtyEight.com wrote, “we have a player whose Statcast data doesn’t match the conventional narrative. If the commentators and traditional data sources are correct, Utley is headed toward a premature retirement. If Statcast™ is right, Utley has an about average bat, one that should recover. The Phillies just have to stick by him long enough to let him do it.”