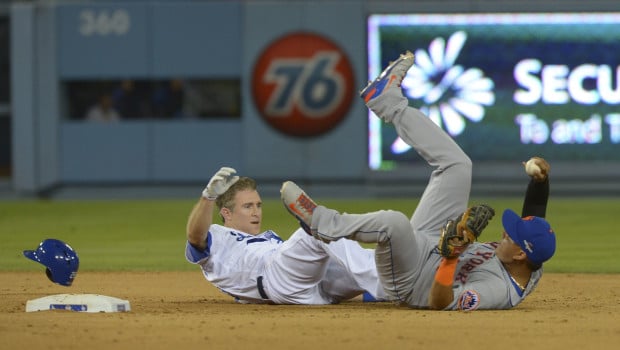 CHASE UTLEY ‘DEMONIZED’ BECAUSE OF HIS NLDS TAKEOUT SLIDE

Phillies legend Chase Utley won’t be suspended for breaking Mets shortstop Ruben Tejada’s leg with a takeout slide during the Dodgers’ NLDS last October, as his two-game penalty was dropped in a decision announced yesterday.

Utley has yet to comment publicly on the matter, but his agent, Joel Wolfe, told the Los Angeles Times that he hopes the ruling will help absolve his client.

“It’s unfortunate that Chase got demonized by all of this,”Wolfe told the LA Times. “He has never intended to hurt another player. He’s taken great pride in always playing the game the right way and giving maximum effort every time he steps on the field. MLB determined this was a clean play within the rules, an acceptable play, and a hearing wasn’t necessary.”

Utley attempted to break up a double play in Game 2 of the NLDS by sliding wide of second base and pummeling Tejada, who was upended on the play. Tejada suffered a fractured fibula and had to be carted off the field. Utley initially received a two-game suspension, but he appealed the punishment, which kept him eligible through the rest of the postseason.

The controversy over Utley’s aggressive slide proved to be an impetus for the slide rule change that MLB announced last month. Rolling block slides are now banned, and runners may not alter their pathways for the express purpose of initiating contact with a fielder.