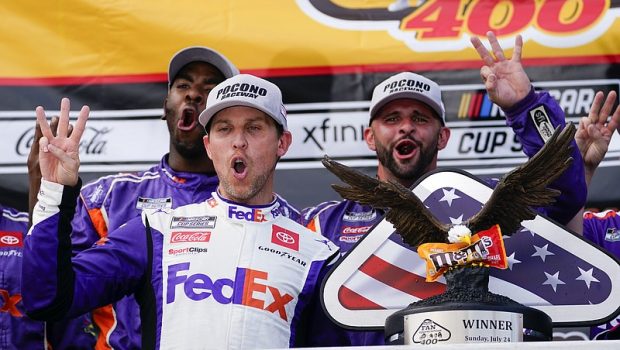 In an extraordinary decision for a NASCAR Cup Series race, Joe Gibbs Racing driver Denny Hamlin had his Pocono win thrown out and runner-up and teammate Kyle Busch also was disqualified after their Toyotas failed inspections.

Chase Elliott shot up from third place, and the Hendrick Motorsports driver was awarded his fourth victory of the season. He never led a lap in the No. 9 Chevrolet — and his car also was inspected by NASCAR.

Hamlin lost his record seventh victory at Pocono and his third win of the season. Busch led a race-high 63 laps.

NASCAR believed the last time it disqualified an apparent winner was April 17, 1960, when Emanuel Zervakis’ victory at Wilson Speedway in North Carolina was thrown out because of an oversized fuel tank.

“We were shocked to learn of the infraction that caused our two cars to fail NASCAR’s post-race technical inspection,” Joe Gibbs said in a statement. “We plan to review every part of the process that led to this situation.”

The penalties can be appealed, and both Toyotas were sent to NASCAR’s research and development center in North Carolina for further evaluation. NASCAR said the infractions were not caught in the pre-race inspection because the wrap was not removed from the cars until after the race.