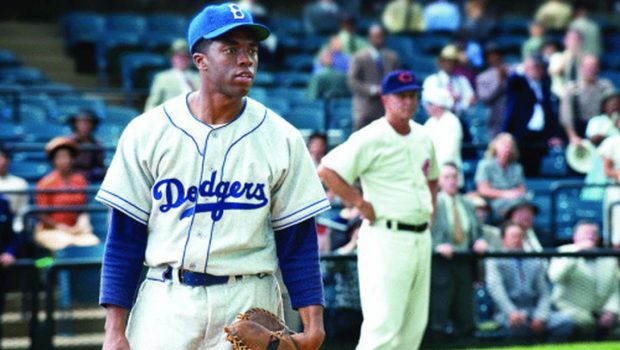 Chadwick Boseman became a global star in “Black Panther” and his role as T’Challa, a groundbreaking Black character in the Marvel Cinematic Universe that shot him to fame upon its release in 2018.

But he already was a star in the sports universe, winning critical praise for his portrayal of Jackie Robinson in the biopic “42.” That movie, released in 2013, showed an incredible talent with immense promise.

Robinson was the first Black player to compete in Major League Baseball, breaking the color barrier when he played first base for the Brooklyn Dodgers on April 14, 1947.

In a statement, MLB said: “We are devastated by the tragic loss of Chadwick Boseman. His transcendent performance in ’42’ will stand the test of time and serve as a powerful vehicle to tell Jackie’s story to audiences for generations to come.”

LeBron James tweeted a photo with Boseman with the caption: “Rest in Paradise King! #TheHellWith2020 #FCancer”

Boseman popped up at various sports events, including the 2018 and 2020 NBA All-Star Games, where he was a dunk contest judge and hung out with former NBA greats like Scottie Pippen. He shared the red carpet at the Oscars with Kobe Bryant in 2018. Bryant won for his short film “Dear Basketball” and “Black Panther,” in 2019, claimed three of the six statues for which it was nominated.

Boseman, a native of Anderson, South Carolina, also had a small role in the 2008 film “The Express,” based on the life of Syracuse football player Ernie Davis, the first African-American to win the Heisman Trophy. Boseman played Syracuse halfback Floyd Little, a three-time All-American.

Boseman was diagnosed with Stage III colon cancer in 2016 and continued working through multiple surgeries and chemotherapy, according to a statement released by his family.