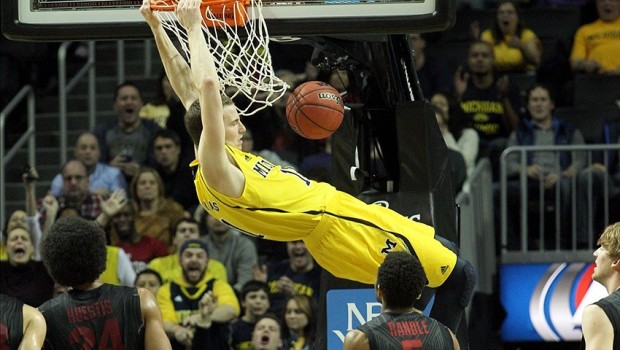 Embiid and Vonleh are still possible at 3

NBA mock drafts are everywhere. Even your pizza delivery boy probably has one.

But the gold standard is done by Chad Ford of ESPN.com, and here are his picks for the Sixers’ five picks in the first and second rounds of Thursday night’s draft:

The Sixers are doing what they can to move up in the draft. The news of Embiid’s injury hurt them more than anyone. Philly had become convinced that the Cavs would take Embiid and the Bucks would take Parker, giving them their No. 1 target: Wiggins.

The Sixers have zeroed in on Exum and Noah Vonleh here. They are very high on Exum as a prospect. He obviously plays the same position as Rookie of the Year Michael Carter-Williams. However, the Sixers feel the two can play together and they continue to explore Carter-Williams trades that would land them a third pick in the top 10. Even if they don’t move Carter-Williams, they might still lean toward Exum. They have him ranked as a stronger pro.

Noah Vonleh — 6-10, 247, PF from Indiana — would give them a big who could spread the floor and help Noel on the defensive end. He’s especially appealing as there aren’t great bigs available to them at the No. 10 pick. If the Sixers can’t get another pick in the Nos. 5-8 range, they could decide to go ahead and take Vonleh here.

There also is a chance that the Sixers would take Embiid here. They are trying to get as much medical information as they can on Embiid (as are the rest of the teams in the NBA). They had Embiid ranked very high on their board and showed last year that they aren’t afraid to take an injured player and wait for him to get better. I think ultimately it’s Exum or Vonleh, but Embiid is definitely in play here.

If Embiid falls to No. 10, I think this is his backstop. Can’t imagine he slides past Philly.

One of the downsides of taking Exum is there is a huge glut of wings on the board. Ideally, the 76ers need a forward here. But the draft board doesn’t really support it right now. Of the shooters who are on the table, Stauskas, Harris and Young all seem to be in the mix here. Stauskas gets the slight nod here.

We’ve had Dario Saric here in the past and he’s still a possibility. However, Saric is staying in Europe for the next two years. While it doesn’t preclude the 76ers from taking him here (especially given all the picks they have) this team needs players.

Jokic also turned a lot of heads in practices at the Nike Hoop Summit. He’s not a great athlete, but he is very, very skilled for a 19-year-old. He finished in the top 5 of Kevin Pelton’s projected WARP rankings. We know how much the 76ers rely on analytics and Jokic also fits a need.

Had Dinwiddie not torn his ACL this winter, he would be much higher on this mock. Many teams already are looking at him in the late first round. I don’t see him sliding past the 76ers here. He can play both the 1 and the 2.

There is no way the Sixers are keeping all of their second-round picks. But if they do, it will be to keep adding athletic upside players like Antetokounmpo. He played very well in the D-League last season and should be able to get a few minutes here and there on what appears to be the youngest team in the league.