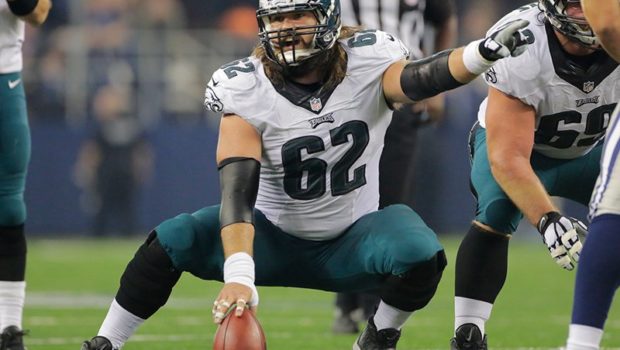 CENTER OF ATTENTION: EAGLES’ KELCE WILL BE BACK, ESPN-ER SAYS!

The Eagles are expected to make a significant number of cuts/trades to shed salary cap space and sign top playmakers for quarterback Carson Wentz.

ESPN NFL Insider Adam Caplan doesn’t believe center Jason Kelce will be one of them.

“I think (Kelce) will be on the team,” Caplan said on 97.5 the Fanatic yesterday. “The issue is whether he takes a pay cut or not. I fully expect Kelce to be on the team, and the simple reason is this: there are no centers ready to step in out there. The only thing is: when will Isaac Seumalo be ready to move to center if they decide to move in that direction? We’ll have to see what happens.”

Kelce is owed $7.2 million in 2018 and the Eagles would save $6 million against the cap if they were to part ways with him then.

“The sense I get is that most likely, Kelce will be back as the starting center,” Caplan said. “I don’t know if they’re happy or not with his cap number. His base salary is $5 million. For a guy of his tenure, it’s not bad at all.

“It’s just a matter of, do they think, long-term, because he’s signed through 2020, could he be the guy? He’s clearly not the same player he once was but he’s still solid. He’s one of the top 10 centers in the league. But they just have to decide: when will Isaac Seumalo be ready to be the center? I think more likely he’ll compete against Allen Barbre for that left guard job. That makes more sense to me at this point.”